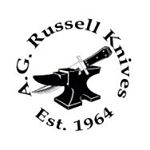 Maple and Damascus Bird and Trout