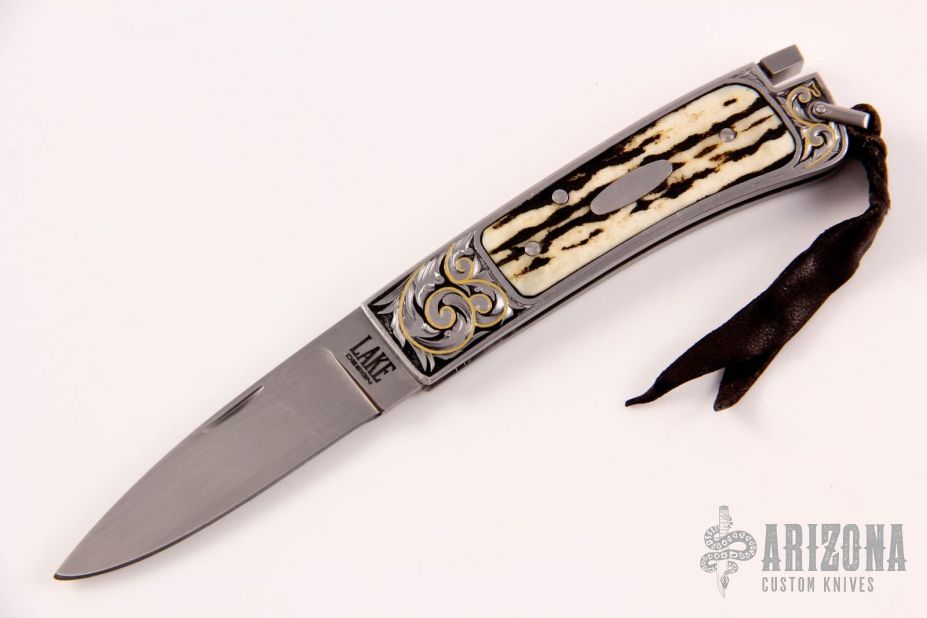 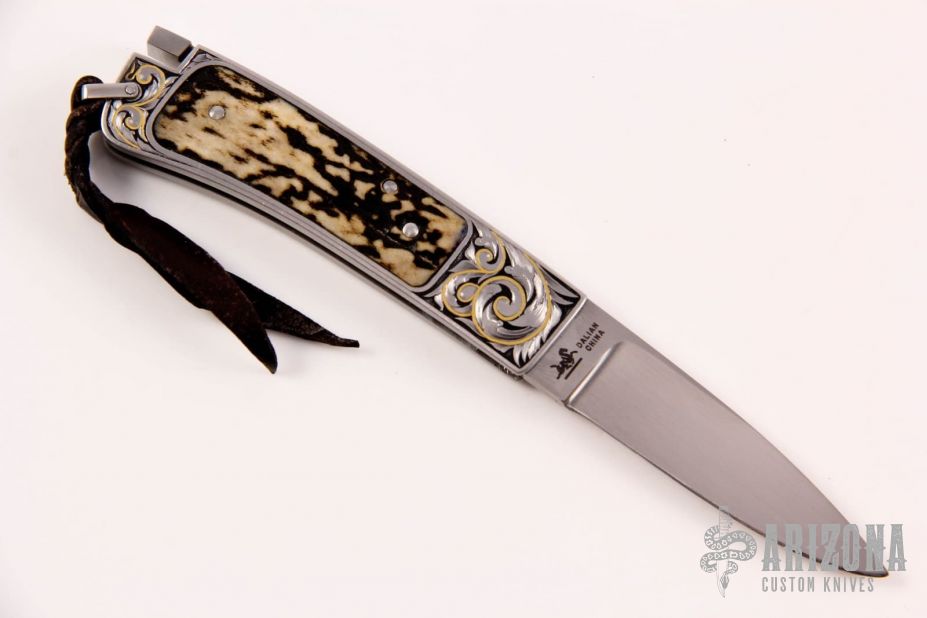 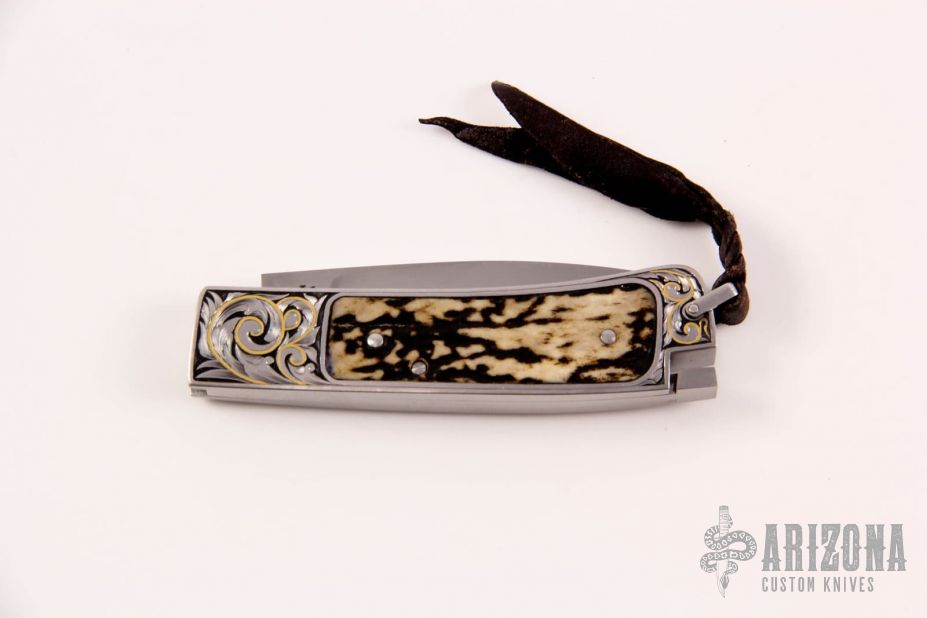 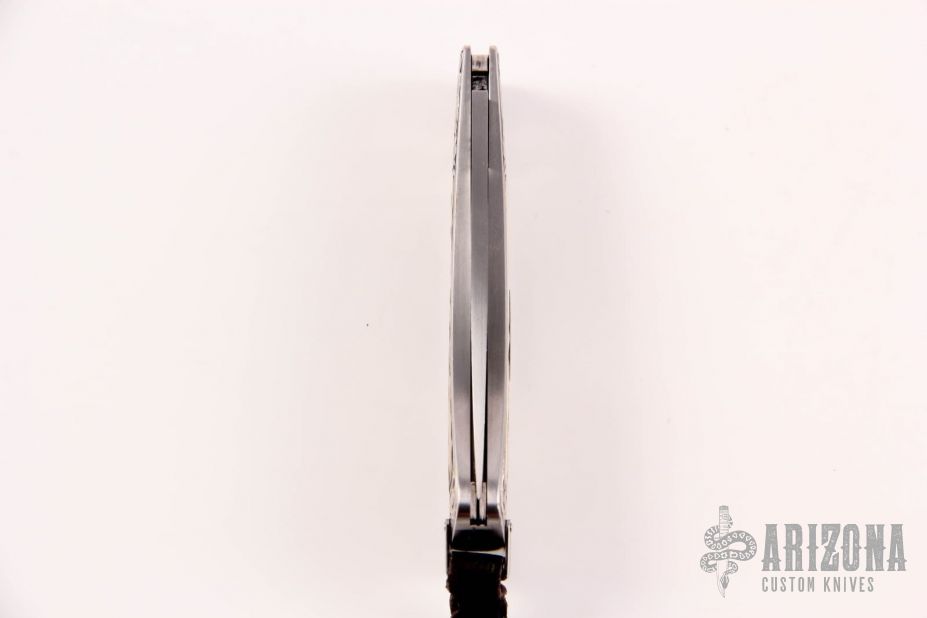 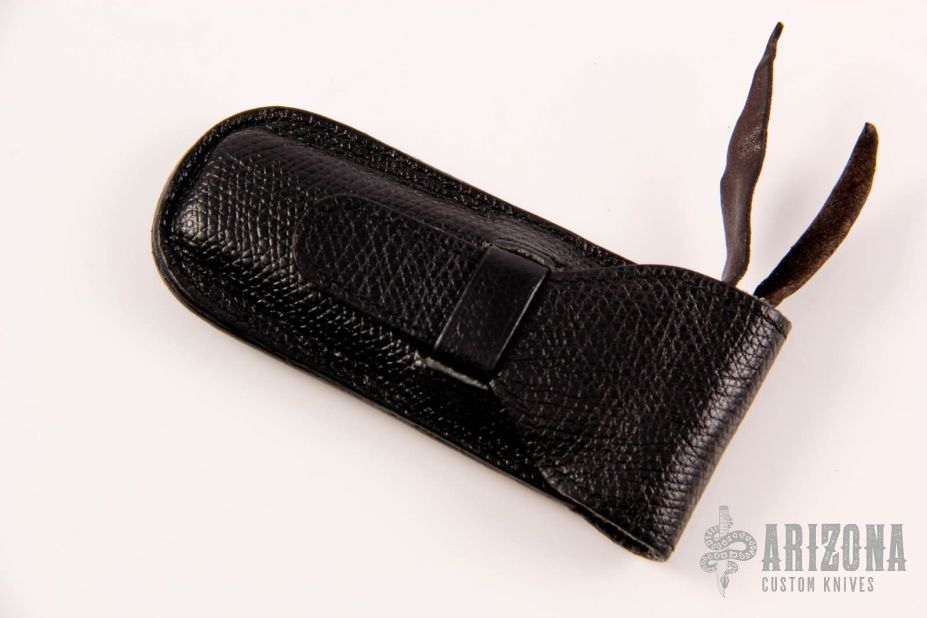 Backlock folder designed by Ron Lake and manufactured in China by CAS Iberia / Dalian. This knife has the quality and workmanship of a custom made knife. One of 500 made. Featured on the cover of Blade 2002. Ron called this a "Completely Hand-crafted Knife" and you'll agree. As good or better than most customs at this price. Excellent condition. Comes with a leather pouch. Engraved by Michael Artemis. Blade does have some scratches, handle has a few small scratches.

Labeled by sportswriter B.R Hughes, as the "Father of the Modern Day Folding Knife," Ron Lake has been making knives for over 50 years. His working career started in 1960 after obtaining a machine tool degree. He was first employed as a model/pattern maker in an electrical products manufacturing company where projects included naval sonar equipment. He then worked for ten years at a parts manufacturer making prototypes for the aviation and automotive industry. In 1965 he set up a small workshop in his garage and started making knives as a hobby in his spare time after work. Ron's first knives were mostly fixed blade hunting knives, crude by comparison to his work just a few years later, and in 1970 he designed and produced the first ever Tail-Lock "Interframe" folder. The design employed a machined metal frame in which the handle material was housed, thus protecting the handle material and making for a stronger knife. Additionally, placing the tab at the end of the lock bar gave the user a mechanical advantage. At that time these design elements were recognized as major advancements in folding knives. Ron joined the knifemakers' guild in 1971 and became a full time maker the following year. His signature style knife was patented in 1974, and he was elected to the Cutlery Hall of Fame in 1998. Ron Lake's knives have always displayed a very clean and minimal aesthetic with the utmost emphasis on craftsmanship and precision. The Interframe folder has stood the test of time; nearly fifty years later this patented design remains one of the most recognized knife forms. There are Lake Interframe folders housed in the collections at the Smithsonian Museum and the Metal Museum in Memphis, TN. Ron has multiple patents & trademarks, has designed knives for companies including Coast Cutlery, CRKT and Schrade, has contributed information to articles in magazines and books, and freely gives advice to young knifemakers. Although Ron no longer takes orders for his custom knives, and only makes a few a year, he does attend shows including the East Coast Custom Knife Show, the Arts in Metal show and The Art Knife Invitational. He is also actively designing and producing a patented, limited edition knife that is exquisitely crafted in Italy.