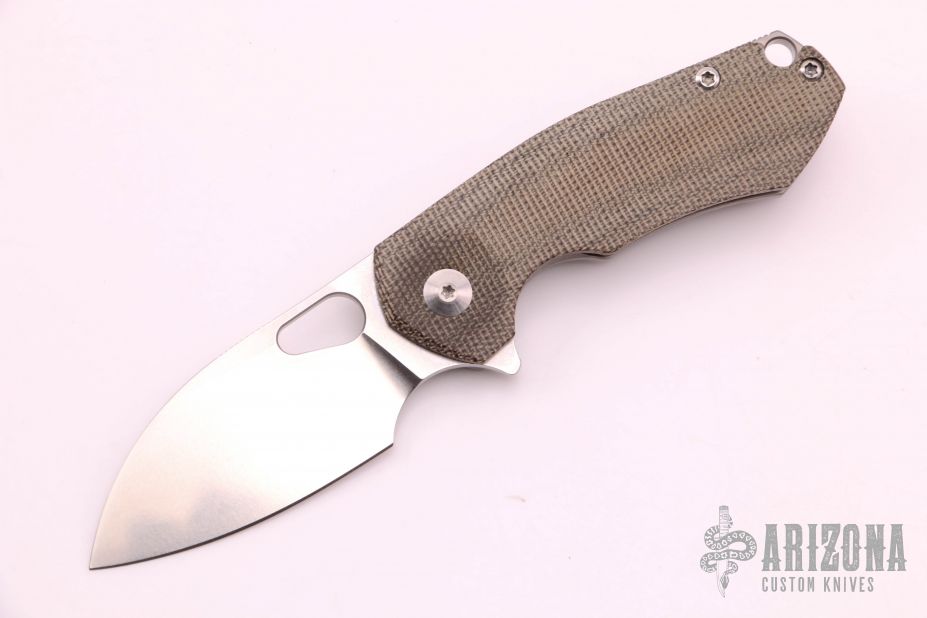 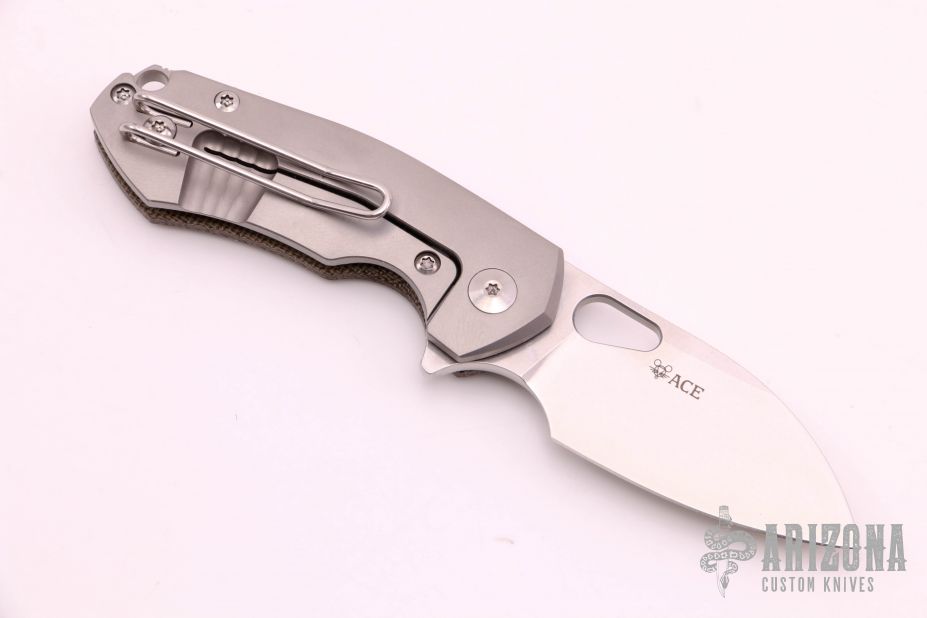 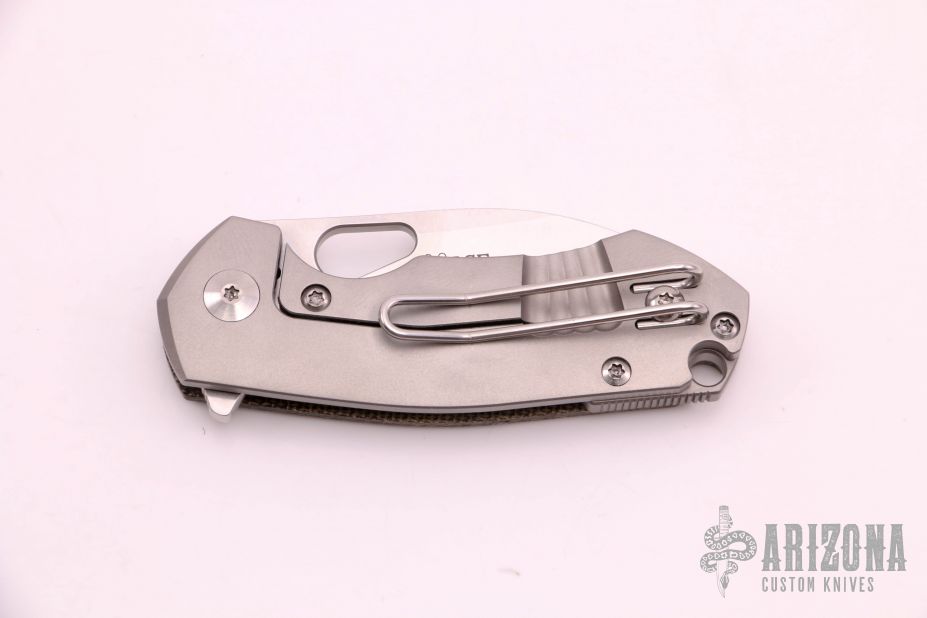 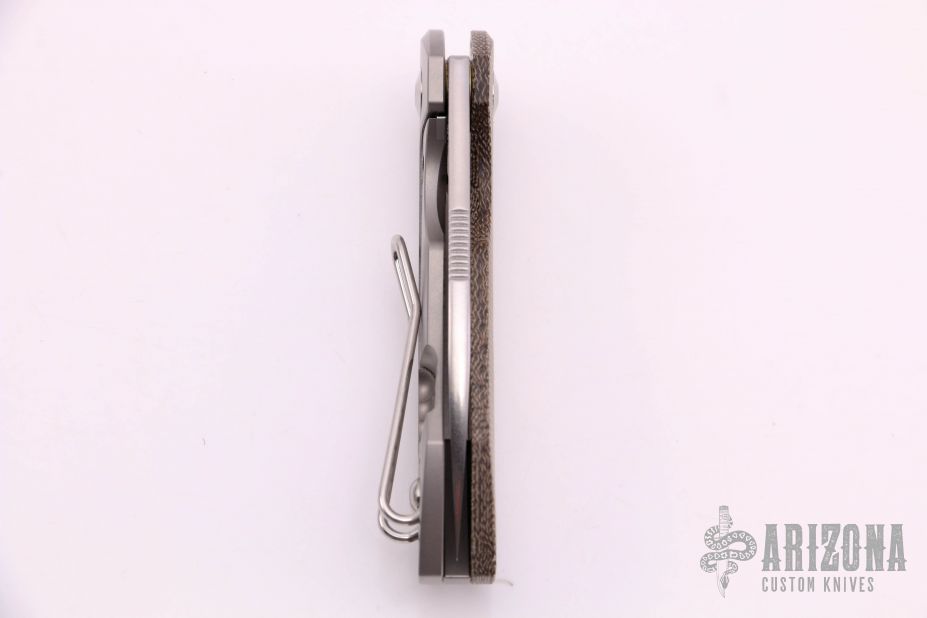 The ACE Riv by Giant Mouse Knives features a stonewashed blade with flipper. The handle has green canvas micarta and blasted titanium frame with tip up clip. Excellent condition.

GiantMouse Knives, the who, the why? GiantMouse LCC is based in California. American owned and Danish by design. Our goal at GiantMouse is to combine amazing knife designs, with the highest possible production quality, at a fair price. The designers behind the GiantMouse brand are world-renowned Danish knife makers and designers Jesper Voxnaes (Vox) and Jens Ansø. Vox and Ansø both grew up in the rural outskirts of Denmark, spending their days sailing on the North Sea, fishing the fjords, hunting in the surrounding woods and exploring the great outdoors. All of which required them to always be accompanied by a good knife. In the hunt for the best possible knife, Jesper and Jens each started making custom knives in 1989. The idea of a joint venture between Vox and Ansø had been brewing for years. But it wasn?t until 2014 when they were sitting in a bar (who would have guessed, but still - true story!) with a good friend who started asking them questions about their individual design processes, and how they licensed their designs. This lead to Vox and Ansø explaining that they enjoy designing together, and that they have collaborated on a number of interesting design ideas. So their friend simply asked ""why not produce these?? and expressed his interest in helping on the business end of things. A few pints later, the idea of GiantMouse Knives was born, a partnership was formed, and the planning had begun for a high-end knife brand with limited numbered knives, of highest possible production quality, designed by Ansø and Vox! GiantMouse knives are not ?mid-techs? or ?semi-custom,? nor have they been assembled or sharpened by Ansø and Vox. However, every GiantMouse knife is designed entirely by Ansø and Vox, and each phase of production is performed in VERY close cooperation with the two designers. Ansø and Vox are the ones holding all meetings with the production company, have full control in any design decision, materials, finish, packaging, etc., and ONLY they review the prototypes and decide on changes, if needed! The 25%: To keep GiantMouse a cutting-edge brand (I know, not even funny? - but still...), Ansø and Vox came up with the idea that only 400 pieces of each folder design would be produced. 300 would be a standard version, and another 100 pieces (25%) would be made in a special version and marked as such. After the 400 knives are made, the design is discontinued! This will make it interesting for the designers, as well as the collectors and end-users, and hopefully keep everyone on their toes in times to come.

I have been a knife maker since 1988 and have been full time since 2001. I started making knives in 1988 after reading an article in an old issue of Popular Mechanics and I made my first knife out of a big file using a bench grinder and a drill press as the only powertools. It was big and crude but I was very proud. Since then I have been hooked on knife making. My knowledge in knife making comes from reading books and magazines about knife making, corresponding with other knife makers and not the least learning by trial and error. I also credit the various forums about knives and knife making both for information, customers and friends.I have always had a great interest in craftsmanship and get inspired by all sorts of things ranging from traditional Japanese carpentry to modern architecture. I have a master degree in Industrial Design which has helped me a lot in refining my knife designs. After graduating I decided to become a full time maker and although it has been hard at times I have never looked back. I like being able to do what I like the most and enjoy being my own boss. I feel very fortunate that I can make a living of something I love so much. My workshop is my cave. I love being in the shop surrounded by tools and materials. Being able to do creative work everyday is a blessing. I like working from home which means I can spend more time with my family and work when I want.Besides knife making I have a few other interests when time permits. I have been rock climbing for some time and really enjoy the thrill of it. So far I have only been climbing on artificial walls since mountains are pretty scarce in Denmark but I love the thrill of it. Shooting handguns is another passion I have. I like the almost meditative state of mind it demands which really makes you relax and focus but also enjoy a little bit of "action shooting". I have some good advice for future knife makers. If you don't want to make your second knife, don't make the first. All the people I know who have made a knife have been completely hooked. I know for sure that I am.