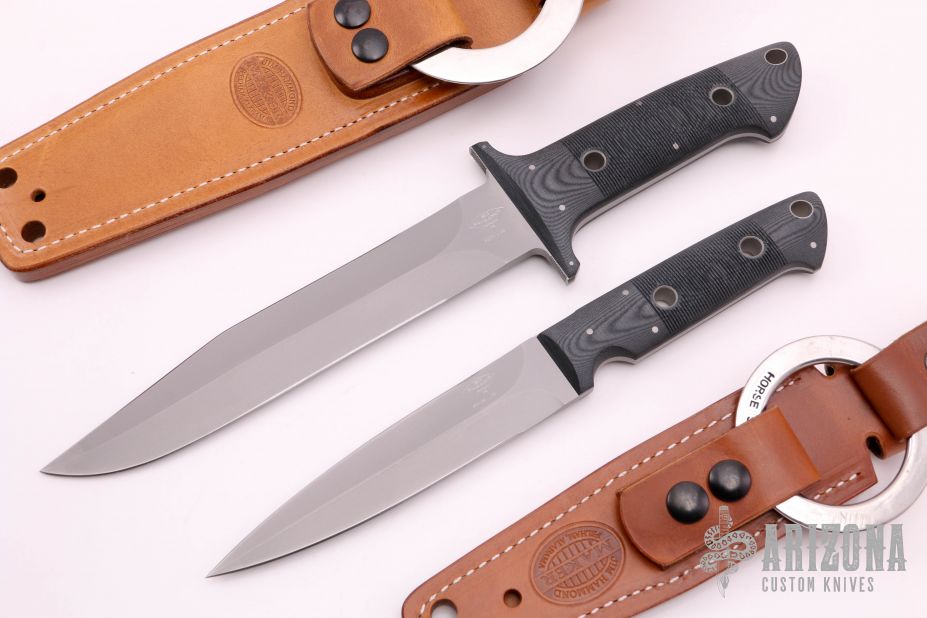 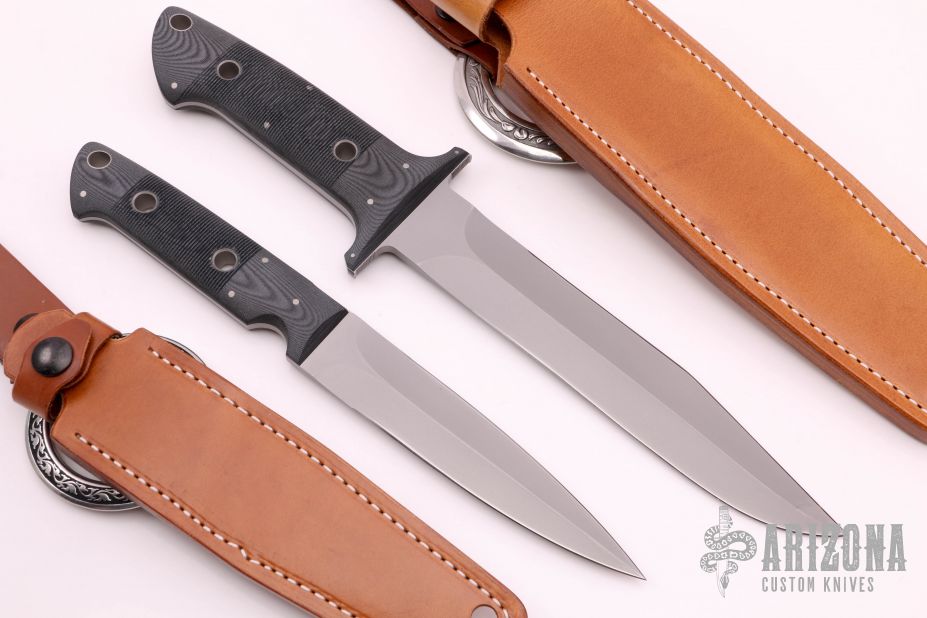 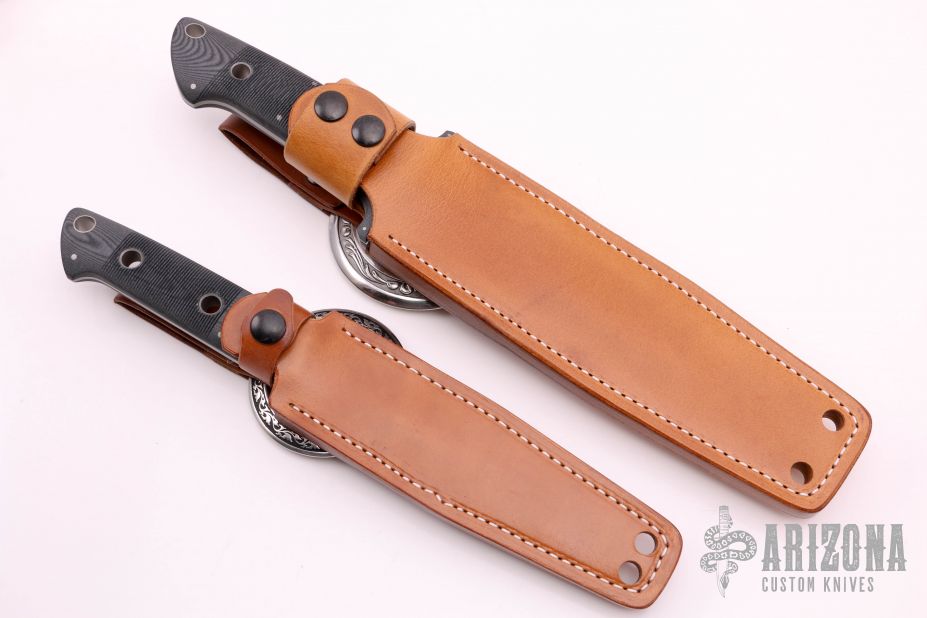 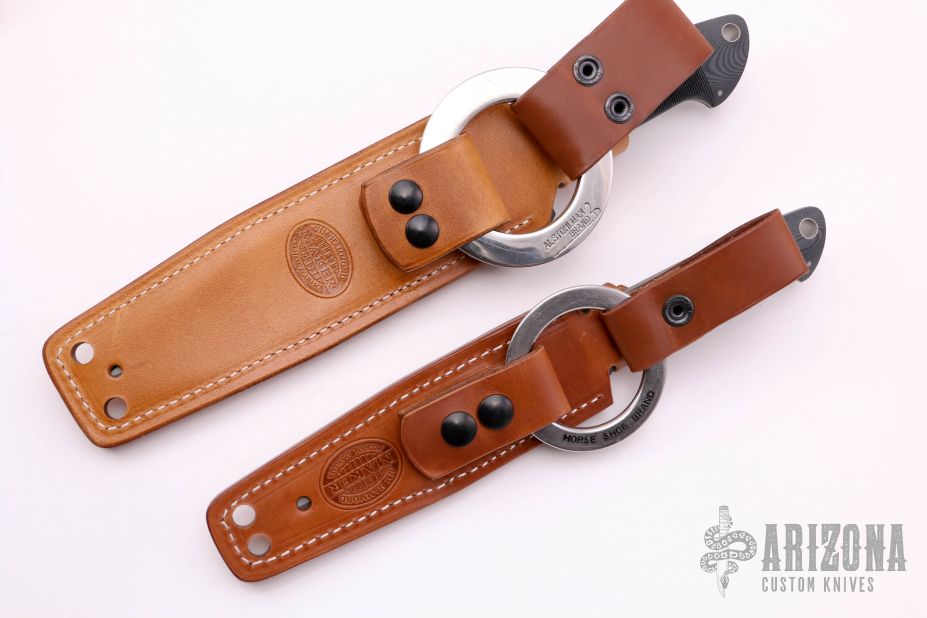 Get email notifications for Hammond, Jim add to wishlist

This Set of knives by Jim Hammond are both #10 and in excellent/new condition.

"Sea—Air—Land—Tactical. Before “Tactical” was even a faint blip on the horizon of the knife industry’s radar screen, the Hammond SEALTAC® was paving the way with special warfare personnel worldwide. Developed in 1981 with U.S. Navy Special Warfare (SEAL) personnel, continuing input of key design factors was received, evaluated and implemented as necessary design criteria for what they themselves considered to be a definitive fighting knife—one suitable for many tasks but primarily prepared as the finest weapon they could have if called upon to serve as their last line of defense. The Hammond SEALTAC® has earned the “combat seal of approval” as it enters its third decade of proven reliability with military personnel throughout the world, including the U.S. Navy SEALs, U.S. Navy Special Boat Units, U.S. Army Special Forces and Rangers, U.S. Marine Corps Force Recon, U.S. Air Force ParaRescuemen, British SAS, and a host of other units and undercover operatives around the globe. The SEALTAC® has a fully double-ground blade that is sharpened on both top and bottom. The point is raised ¼” above the centerline, breaking the line of the spine at the start of the clip on the top of the blade, and curving into the point. This accomplishes three things: equally distributing support between the two edges; greatly increasing the mass at the blade tip; and allowing maximum cutting efficiency of both edges to be maintained. Though the point is slightly raised, it still tracks superbly along the axis of the thrust—in other words, it goes where you want it to go. The wide ricasso area ahead of the guard adds strength at the most highly stressed portion of the blade. The blade retains its ¼” thickness for virtually its entire length along the spine. The tang of the blade handle is fully tapered to .050” thickness for optimum balance and weight reduction. The micarta handle scales are contoured for maximum comfort and control with both a palm and pommel swell. Hand-filed vertical grooves on both sides of the handle add significantly to grip purchase under extreme conditions. Comes with original brown leather sheath. Excellent condition.

The GHOST RECON™ dagger, named by some of the troops in Afghanistan, is an updated military version of my ‘Gray Ghost’ dagger from the 1980’s. Originally named for Colonel John Singleton Mosby, the “Gray Ghost” of the Confederacy, his behind the lines ranger-like warfare tactics perfectly compliment the design features of this knife.

With the addition of optional hand-filed handle serrations in the scales, maximum grip stability is achieved.

Second generation versions will include hand-filed thumb serrations on the back of the blade as an option and the addition of a stainless lined thong hole at the rear of the handle for added lashing capability.

Visit this maker's website: Jim Hammond Knives. Jim Hammond was the first knife maker to work with CRKT, beginning in 1994. His designs for CRKT folders set new standards of construction for production folding knives. After graduation from Clemson University in 1977, Jim became a full-time knifemaker, and is noted for his exquisite and prized work. He is a Knifemakers' Guild member. When not making or designing knives, he fishes, skis, and flies gliders. He holds a private pilot's license for sailplanes and has earned the FIA International Silver Badge for Soaring. Jim says about knife design: Excellence, flair, function - three fundamental keys of quality I strive for in each knife. Doing whatever it takes to aspire toward perfection, making each line a celebration of style, while maintaining the vision of a design's purpose and application. His company, Jim Hammond Knives, is in Pelham, Alabama.