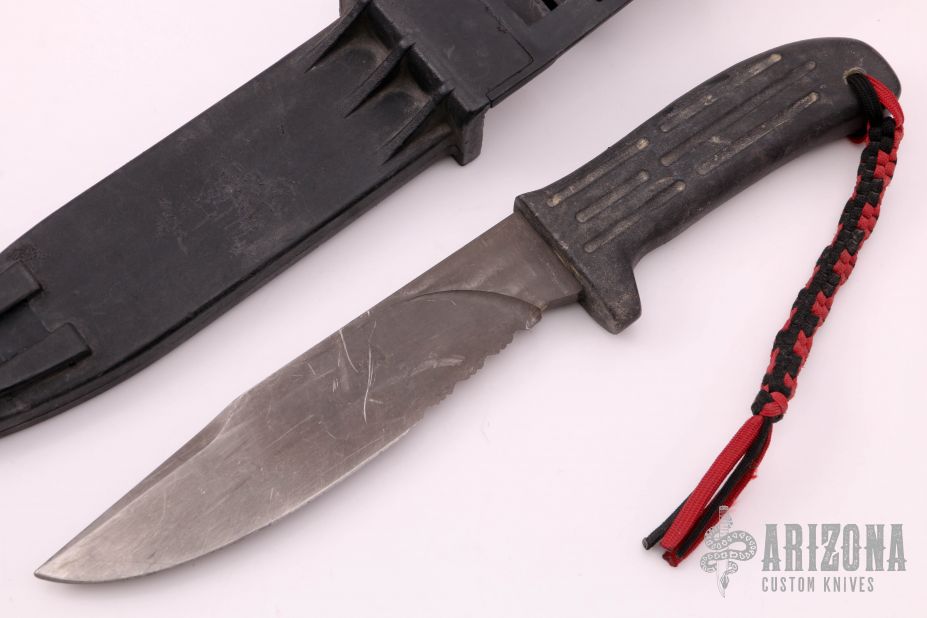 Get email notifications for Mission Knives add to wishlist

This Sterile MPK by Mission Knives features a bead blasted blade with false top edge and partial serrations, .255" blade stock and 1.543" blade depth, hidden tang construction. The handle has an 80% Dupont Hytrel 5526, 20% Dupont Kevlar flock grip with lanyard hole. Comes with original sheath. Has been used and carried, has some scratches and scuffs, has been resharpened, if only this thing could talk. This knife was either pre-production or first production.

This knife was issued to a Master Gunnery Sergeant, USMC, EOD (Retired)

"I was stationed at Marine Corps Air Station (MCAS) El Toro from July 1993 to January 1997 with the Station EOD Team. In 1993 my boss met Rick Schultz of Mission Knives and found out that Rick was developing a Titanium Knife for military use. One of the more serious threats to EOD was from Magnetic Influence Mines (mines detonated by any ferrous metals passing near). My boss asked Rick it we could evaluate one of his knives. Rick loaned us one of his prototype MPKs and we took it to our range to test. We abused the shit out of that knife and never broke it or seriously damaged it. We used a sledgehammer to drive the blade into a railroad tie wall and had our biggest Marine (230lbs) stand on the handle and bounce up and down. The blade flexed over 30 degrees and went right back to normal when he jumped off. We were so impressed that we used unit funds to open purchase 6 of the very first production run of MPKs and did an individual issue to each team member. Attached is a copy of my Service Record Book entry showing this knife was issued to me on September 12th, 1994. I used this knife during two deployments to Iraq of OIF I and OIF II (2003-2004). I carried this knife on the range until I retired from the Marines in 2006 and then continued to carry and use it for the next 15 years working for the Navy doing RDT&E on munitions for the Marine Corps. The original rubber clip holding the knife in the sheath broke years ago and was replaced with one fo the newer ones. Other than that, it is all original."

Mission Knives, Inc. is a manufacturer based in Garden Grove, CA and all products are proudly made in the USA. We design and manufacture highly specialized knives and tools for use by military, law enforcement, special operations groups and the general public. We use advanced materials, primarily titanium alloys, along with other exotic metallic alloys, composites, and high strength polymers. Our products are lightweight, strong, reliable, and durable. Mission Knives? designs are unique in their physical appearance, as well as material composition for the production of indestructible cutting equipment. We guarantee that our products are the highest quality, and among the best and strongest manufactured. All products are fully guaranteed against any defects in workmanship and materials. Mission's knives are designed to function in all extreme environmental conditions as camping aids, dive knives and general purpose tools. Our products are well received by both the military and the general public. Mission Knives is a known and respected name in this field and has included A2 and S30V steel knives to our popular titanium knife catalog.