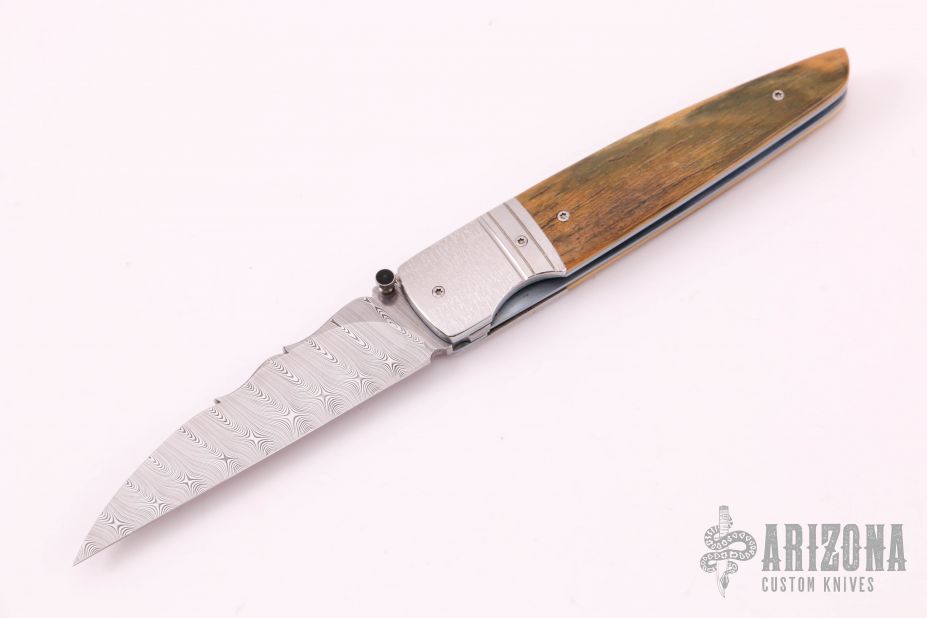 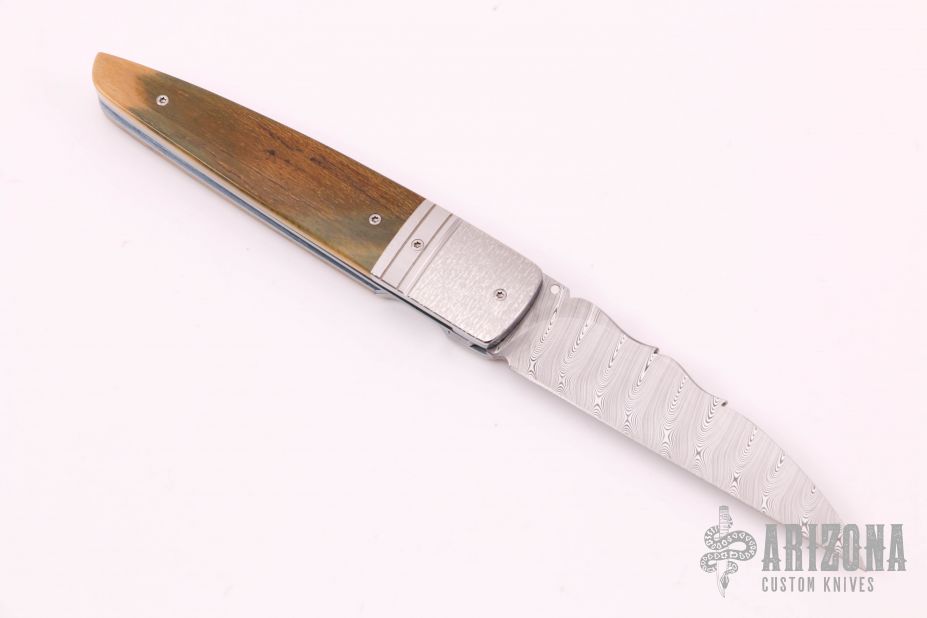 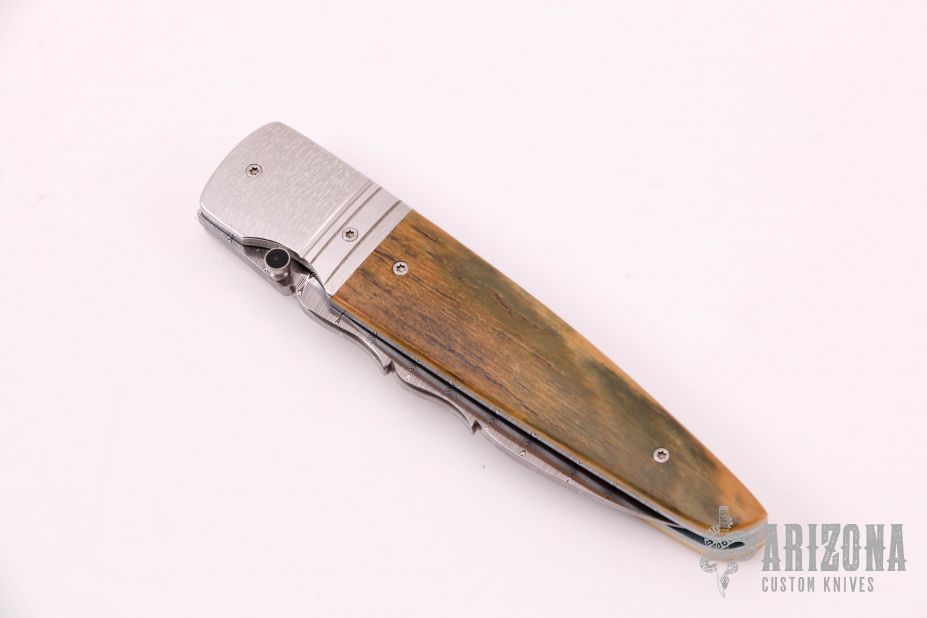 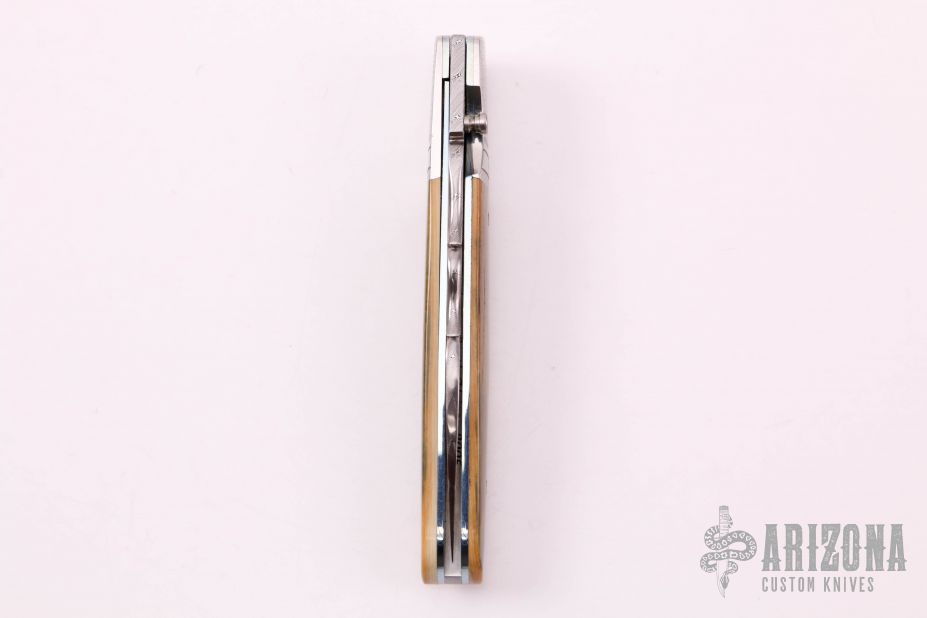 Get email notifications for Thorburn, Andre add to wishlist

André, eldest son of Tommy and Stienie Thorburn was born on May 12th, 1956 in Johannesburg. He is part of an artistic family, people who can and want to use talents to glorify their Creator. With the true Scottish surname and an Afrikaans upbringing, he was bound to achieve unusual things. He grew up on a farm outside Warmbaths where he learned to think for himself and to work with his hands. He married Marietjie in 1978. They have two daughters Elizabeth and Chris-Marlene. His family encourages and supports him in his knife making and they all can lend a helping hand in busy times. He started knife making in 1989, sold his first knife in 1990 to a friend, became a member of the Knifemakers’ Guild of Southern Africa in 1995 and full time knife maker in 1996. Since then he met some of the best knife makers in the world and has been influenced by a lot of them. In 2001 he became a member of the German Knife Makers Guild, at the end of 2004 of the Italian Guild and has also been accepted as member of the American Guild in 2006 where he won an award for the Best Craftsmanship – New member. Other awards were: “Best folder” awards in Lugano Switzerland for two years as well as in Munich Germany for two years. In Dallas Texas at the Spirit of Steel show he won an award for the “Most Innovative” knife. Although he specializes in liner lock folders he makes fixed blades from time to time and for that he received the “Best Hunter” award at the Blade Show West in Oregon, since then he won the same award twice in South Africa at the local Guild Show. He feels especially proud and honored to have received the “Best Overall Maker” as he won awards in four different categories as well as “Best Knife on Show” at the 2008, 2010 and 2011 Knifemakers’ Guild Shows. The “Messer des Jahres 2009” award that he won at the German Show in Solingen in May 2009 came as a cherry on top. He uses modern technology like Laser, Wire and Water jet cutting, CNC work and Computer Aided Designing in the making of his knives. He embellishes his knives with needle file work, engraving and gold inlay. In 2011 he met Julien Marchal and since then make use of his engraving skills on his art knives. Julien is a French speaking Belgium that works in South Africa. He uses an array of different handle materials and steels and builds all the grinders and special tooling that he uses in his workshop himself. He enjoys making tactical folders and uses the IKBS ball bearing system often in his flippers or smaller front flippers. André is one of the leading handmade knife makers in South Africa and was Chairman of the Knifemakers’ Guild of Southern Africa from September 2007 to September 2011. In December 2007, after 30 years, they moved back to Warmbaths (now Bela Bela) to scale down and although they still have to get used to the slower pace of a small town they enjoy building their new home and future in the bushveld. To listen to all the sounds of the bushveld early in the morning and to watch the sun set behind the trees make them really feel blessed and spoiled.