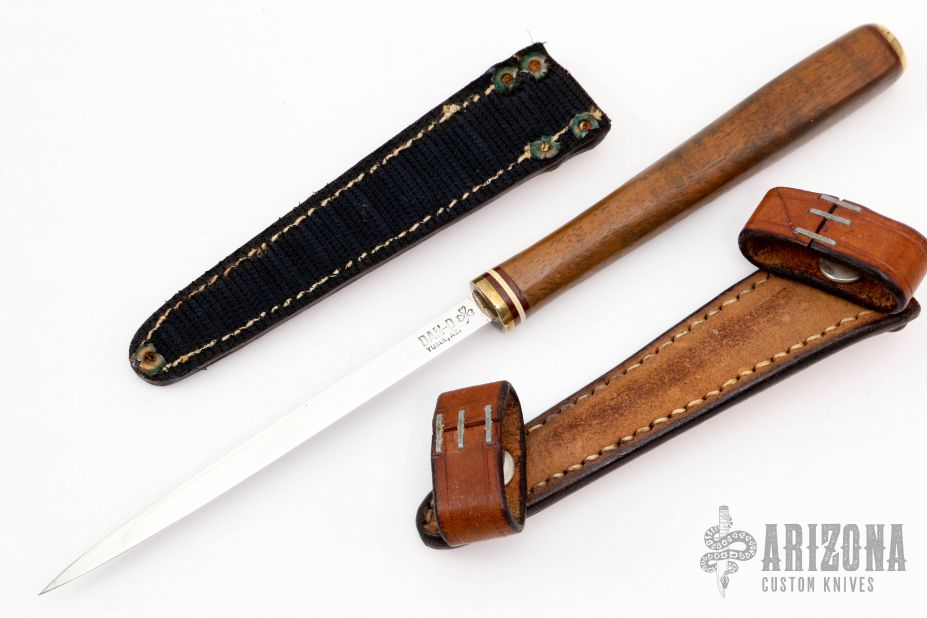 Get email notifications for Dennehy, Dan add to wishlist

This Triangle Dagger by Dan Dennehy features a triangular shaped mirror polished blade that is .333" thick. Wood handle with red and white spacers and brass guard and butt. Includes 2 leather sheaths. One belt sheath and one boot sheath. Excellent condition. Made in the 1970's.

Dan Dennehy made his first knife in 1941 and started making them for fellow Sailors and for Marines fighting in the South Pacific. One of his achievements in the late 1960s was donating, to the Daughters of the Republic of Texas, first Bowie knife on display at the Alamo in San Antonio, where it still is located in the gift shop museum. Dennehy championed the use of Micarta, a prefabricated material that many knifemakers still use today for their handles. He helped to spread the popularity of the material by telling his friend and foremost knifemaker of the time, Bo Randall, about it - and it caught on quickly throughout the industry. For that and other achievements, he was inducted into the Cutlery Hall of Fame in 2007. In 1970, he was one of the 11 founders of the Knifemakers' Guild, along with prominent knifemakers and friends, Bob Loveless and A.G. Russell. Among the many owners of Dennehy knives were John Wayne, Lee Marvin, Clint Eastwood, Carlos Hathcock, Barry Goldwater, G. Gordon Liddy, musician Steve Miller and many other celebrities. His knives, adorned with the Dan-D shamrock logo, have been used by U.S. military members in every war since World War II. Dennehy was proud that his knives were used by many elite forces including the Navy SEALS, Marine Force Recon and the Army’s Special Forces.