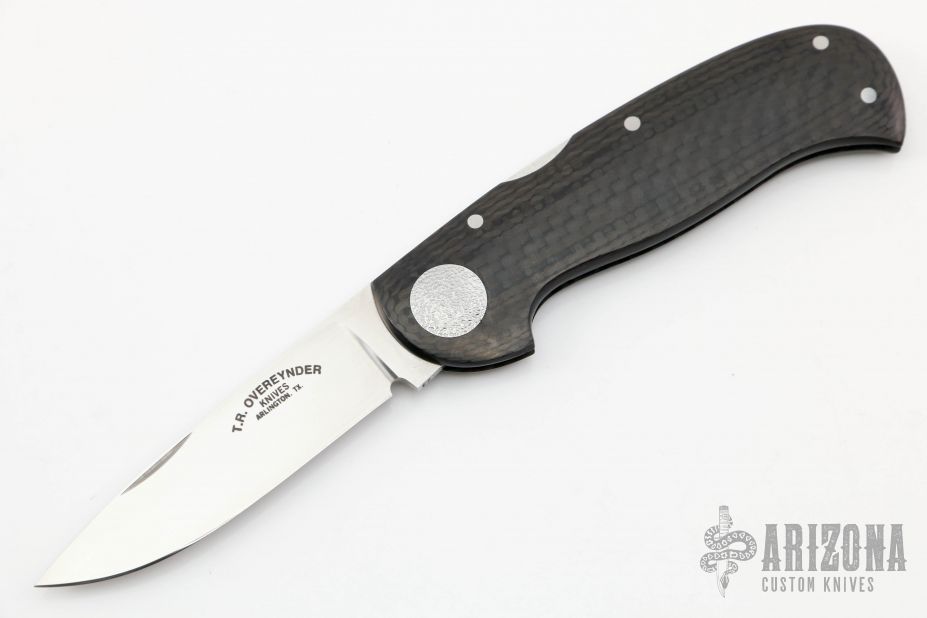 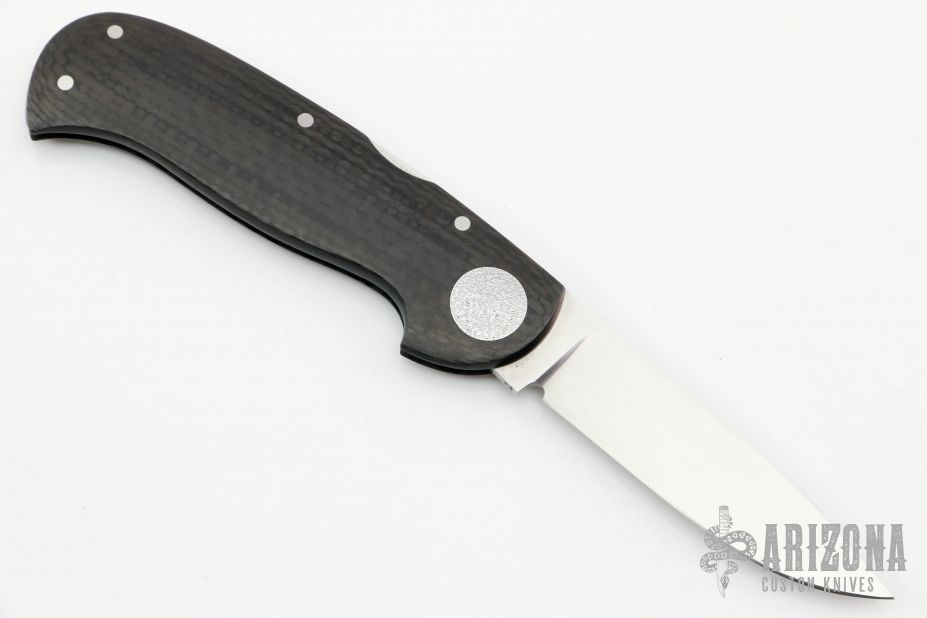 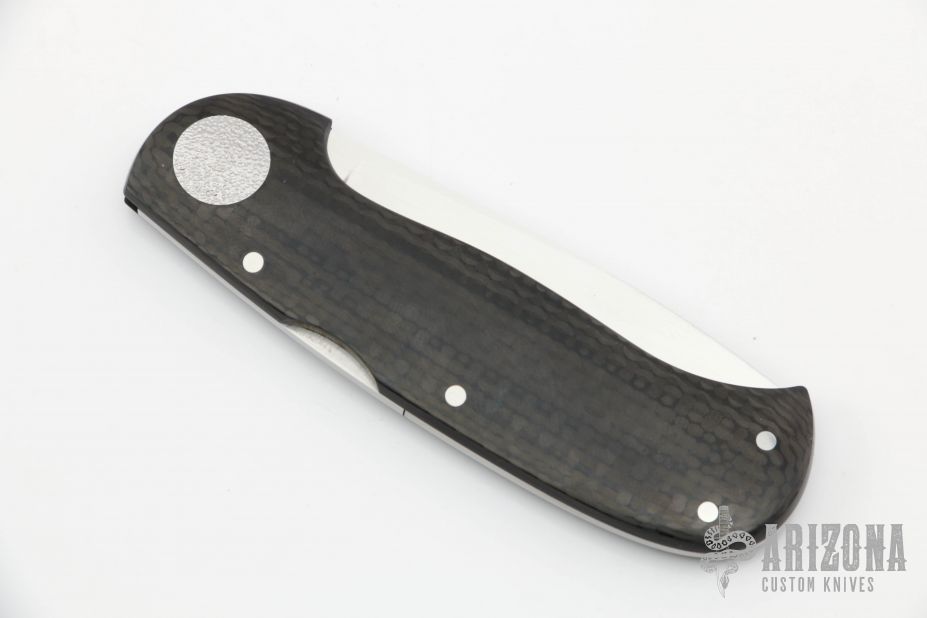 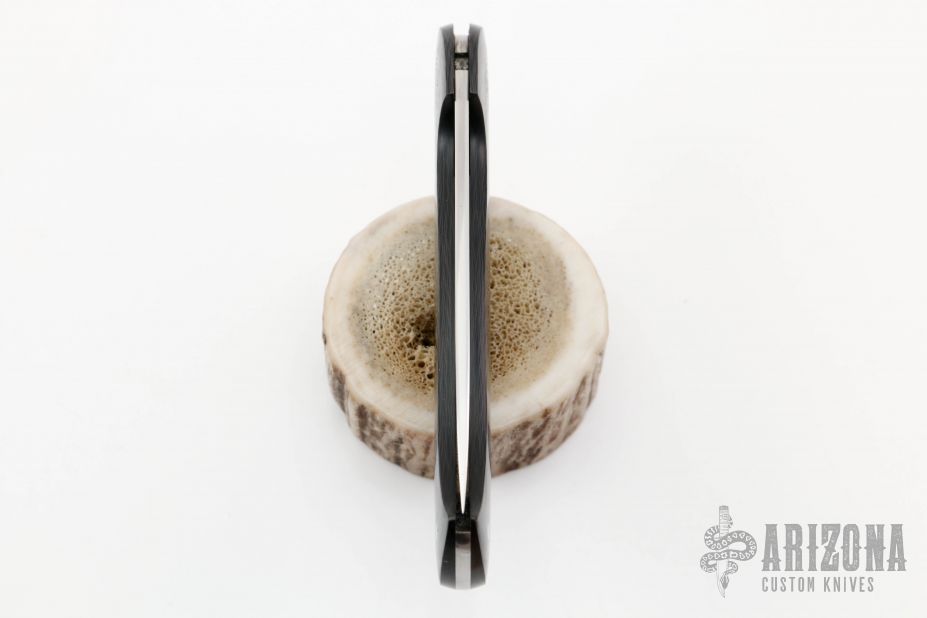 This Model 5 Utility lockback by Tommy Overeynder features a hand rub satin finished blade with nail nick. The blade is crafted from Dietmar Kresslers personal steel alloy that is heat treated to 61/62 RC. The handl ehas carbon fiber covers, stippled stainless steel pivot, stainless steel spring and backspacer. Comes with a COA dated September 28, 2009. Comes with a leather case and also a page with the Chemical Analysis for the blade steel. Excellent condition.

"I began making knives in 1977 after seeing a couple handmade knives my father-in-law, who was a master tool and die maker, made. I made seven, all folders, to give away as Christmas gifts to my family members. While searching for what little information that was available at the time I learned there was a collector market. So, I began designing, making, and selling my work and have enjoyed a demand for my handmade knives since that time. I became a full-time maker after my retirement in December 2001 from a 36-year career in the aircraft industry. I prefer making collector grade folders, but I make a few bowies, chute knives, etc. on occasion. I use CTS-XHP, PSF-27, CPM-154, CPM-D2, BG-42, D-2, S30V, S60V, RWL-34 and a fair amount of damascus. My primary frame materials is 416 stainless steel. I like stable handle materials such as mother of pearl, minerals and jigged bone, but I also use mammoth and hippo ivories, and a few woods, micarta and carbon fiber. I was a voting member of the Knifemaker’s Guild from 1983 through 2016 and never missed a show. I’m also a charter member of the Texas Knifemakers Association. Also, I am a member of the CKCA (Custom Knife Collectors Association). Over the years I have been blessed with winning quite a few awards as a knifemaker. My first was at the 1986 Knifemaker’s Guild Show in Dallas, TX where Bob Lum and I were the first makers to receive the Beretta Award of Outstanding Achievement in Handmade Cutlery. Then in 2002 at the Spirit of Steel Show in Mesquite, TX I won the “Best Folder” award. And at the 2006 Knifemaker’s Guild Show in Orlando, FL I got “Best Collaboration” on a knife that Joe Mason engraved. Again in Orlando at the 2008 Guild Show I won two awards, “Best of Show” and “Best Art Knife” with the same knife that Joe Mason also engraved. In 2009 at the Knifemaker’s Guild Show in Louisville, KY I won “Best Folder”. Then in 2010 at the Blade Show in Atlanta Brian Hochstrat and I won “Best Collaboration” on two daggers that Brian engraved. In 2012 at the Lone Star Knife Expo in Ft. Worth, TX I won the “Best Folder” with a two-blade Sowbelly. Later the same year at the Guild show I won “Best Multi-blade” with a Serpentine trapper. And I was given the very prestigious “Red Watson Memorial Friendship Award”. Then I won “Best Multi-blade Folder” award at the 2013 Guild Show. I was awarder again at the 2014 show for “Best Multi-blade Folder” with a 3 blade Lockback Whittler that Tony Bose supplied a pattern to me for. More awards were collected at the 2015 ICCE/Knifemaker’s Guild show in Kansas City, MO, I was awarded “Best Folder”, “Best Multi-blade” and “Best Art Knife” with three different knives. Awarded the Knifemaker’s Guild “Best Folder” award at the 2016 ICCE/Knifemaker’s Guild show. I was inducted into the Art Knife Invitational in March of 2016. This was a great honor to become a member of the prestigious group of world class knifemakers, my first show at AKI was October 28 of 2017."

For over 30 years trained machinist and graduate mechanical engineer Dietmar F. Kressler has been counted as an internationally recognized luminary among knife makers. This passion became his calling and his vocation – and this passion speaks forth from each one of his knives. The pinnacle of technical expertise and the artist’s creativity is what makes Dietmar F. Kressler’s knives so unique. Each piece is marked by its own clear language of form. Finishing techniques, such as engraving and the use of Damascus steel, lend them even more interesting accents. The artist, a member of the German Knifemakers Guild, the American Knifemakers Guild, the Japan Knife Guild, the Corporazione Italiana Coltellinai as well as the Art Knife Invi­tational, among others, relocated his atelier at the end of 2004 from Odelzhausen to Achim/Baden near Bremen.