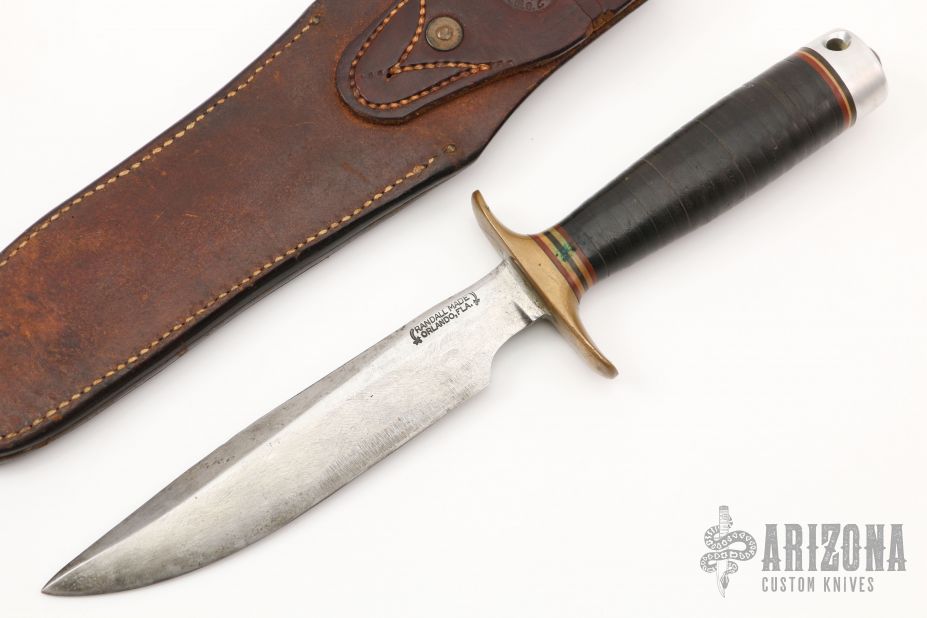 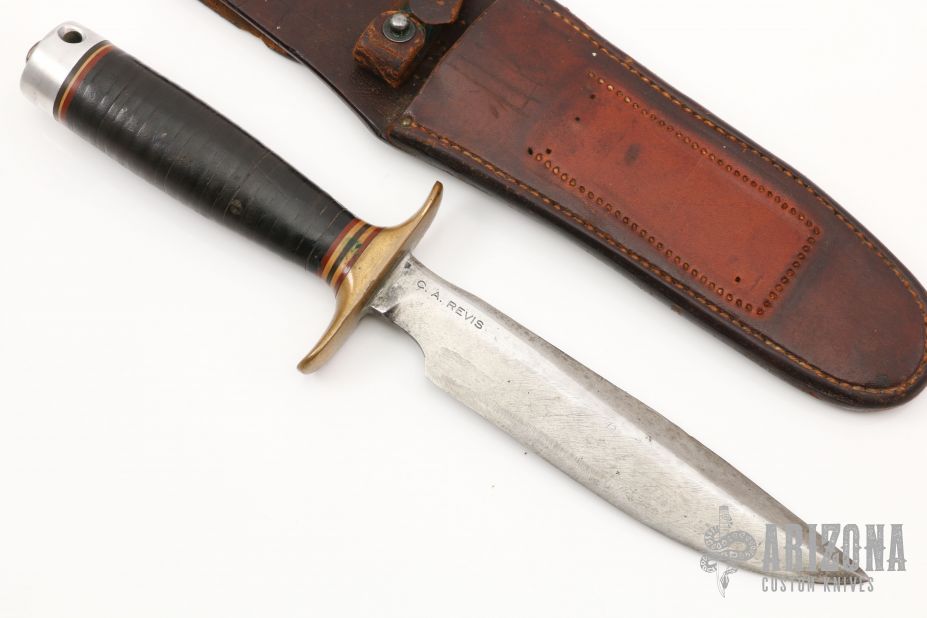 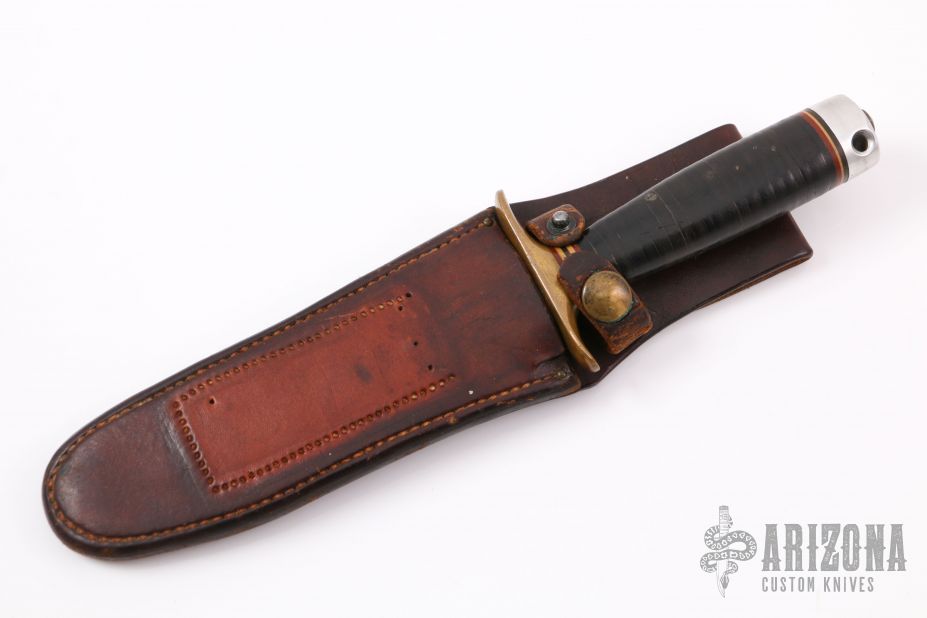 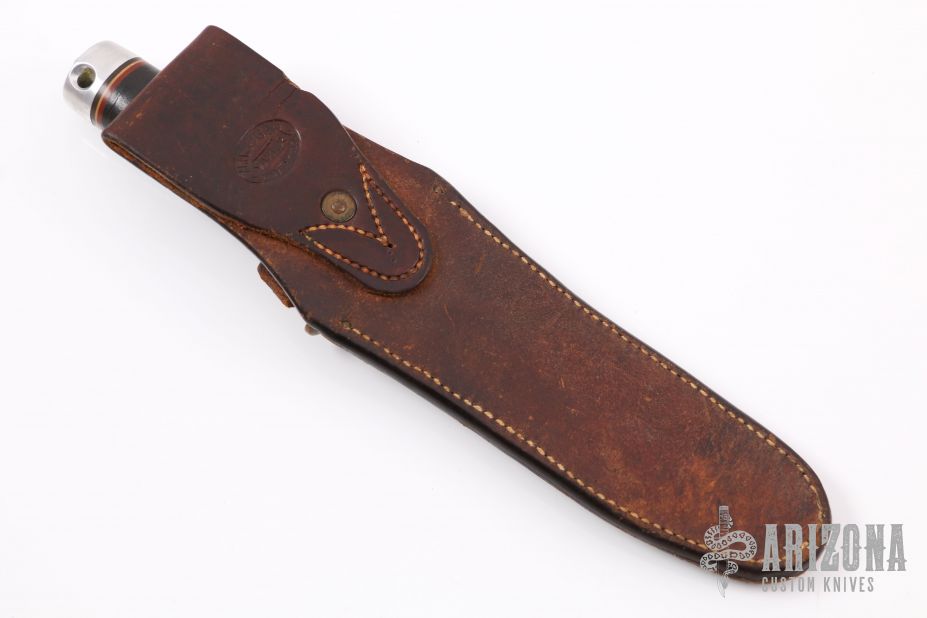 by Randall Made Knives

Get email notifications for Randall Made Knives add to wishlist

"The Model 1 was made famous by Allied combat troops in World War II and has since been widely used in all theaters of war." This particular knife was used in WWII, has been resharpened, used, lots of scratches and dings, what a story this knife has. .199" blade stock and 1.106" blade depth, satin finish blade with a used to be sharpened top edge. Brass guard, stacked leather handle with red/white/blue spacers, and duralumin butt cap with lanyard hole and brass nutt. The blade has "C.A. Revis" on the b-side. Includes brown leather sheath made by HH Heiser, not sure if this was brown button or not, there is a cut in the top of the sheath, the buttons are worn down and the stone pouch has been removed,  which was common with Theatre carried knives. This knife is old and abused, but likely has an amazing story we can only speculate on.

This knife is a WWII Period knife and somewhat rare in a 6” blade.

With some exceptions, typically ordered by airman due to cockpit size limitations.

Brown and red buttons started post war so it would be correct.

Only issue on this one was that you can see that the stone pouch was removed well after it had been carried and used due to the condition of the leather underneath.

When the pouch was removed straight away, the leather would match perfectly with the rest of the wear on the sheath. 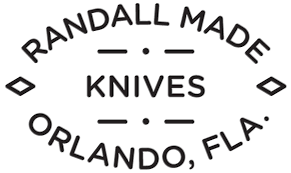 Few modern knifemakers got started without first being inspired by something they read or heard about Bo Randall. He pioneered handmade knives at a time when no one else was even considering it. Instead of trying to keep that market to himself, he promoted the business for everyone concerned, establishing a museum for visitors in his shop and offering encouragement to budding knifemakers. The models offered by Randall have been developed over a period of 80 years from personal experience, extensive research and the study of hundreds of designs submitted by individuals around the world requesting custom-made knives. Each model has been thoroughly field-tested and has proven to be properly shaped and designed for its particular use. Randall knives are 100% hand made and no two are exactly alike. Demand is so great for all models that there is typically a wait of a few years to deliver a new knife ordered from Randall. W. D. "Bo" Randall passed away December 25, 1989 at his home after visiting with all his family earlier in the day. Bo and his son Gary managed the business side by side for over twenty-five years. Gary continues the tradition of hand crafting knives that bear the Randall Made trademark along with his sons, Jason and Michael, of the next Randall generation. Inducted into the Blade Magazine Cutlery Hall of Fame in 1983.