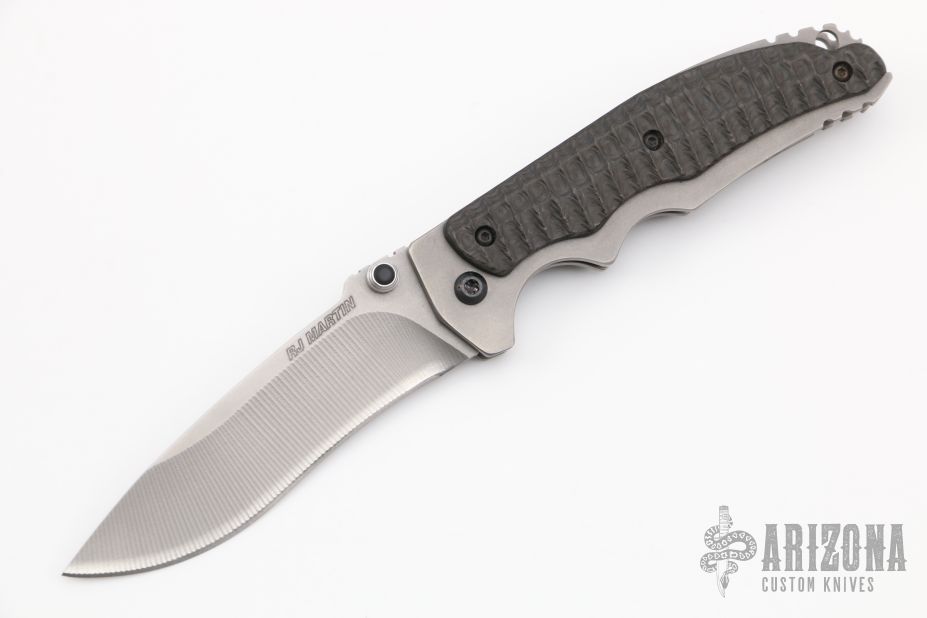 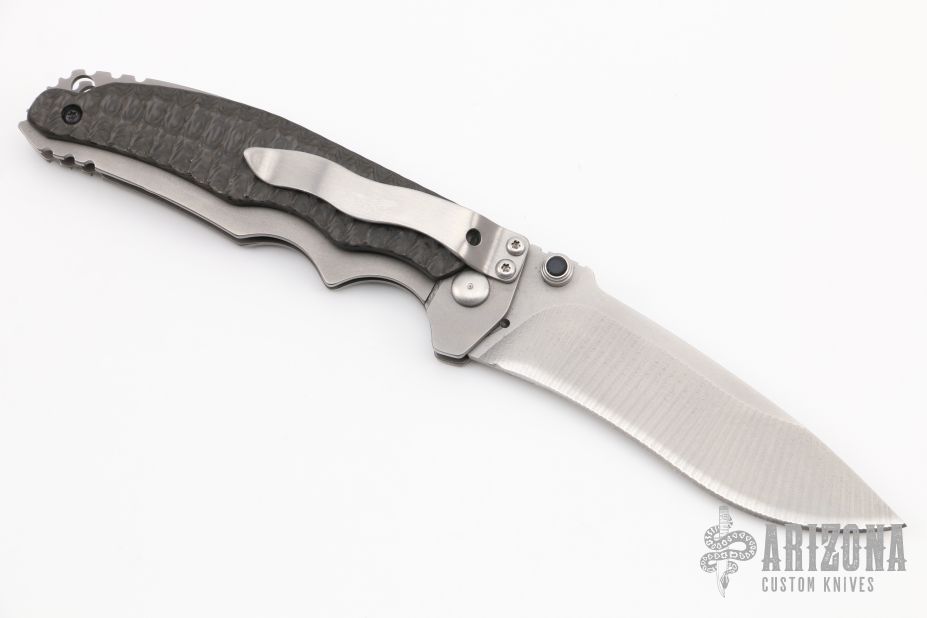 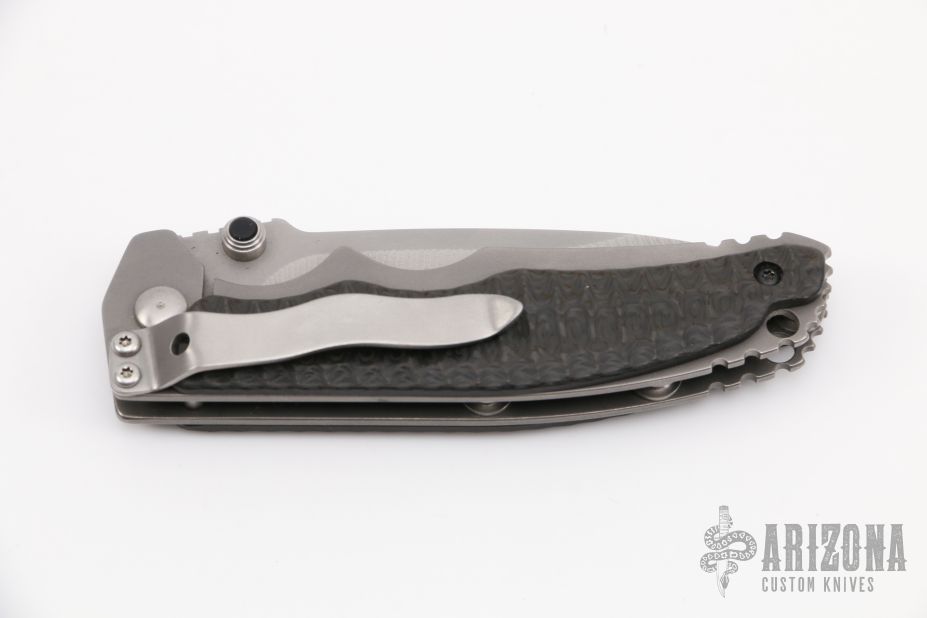 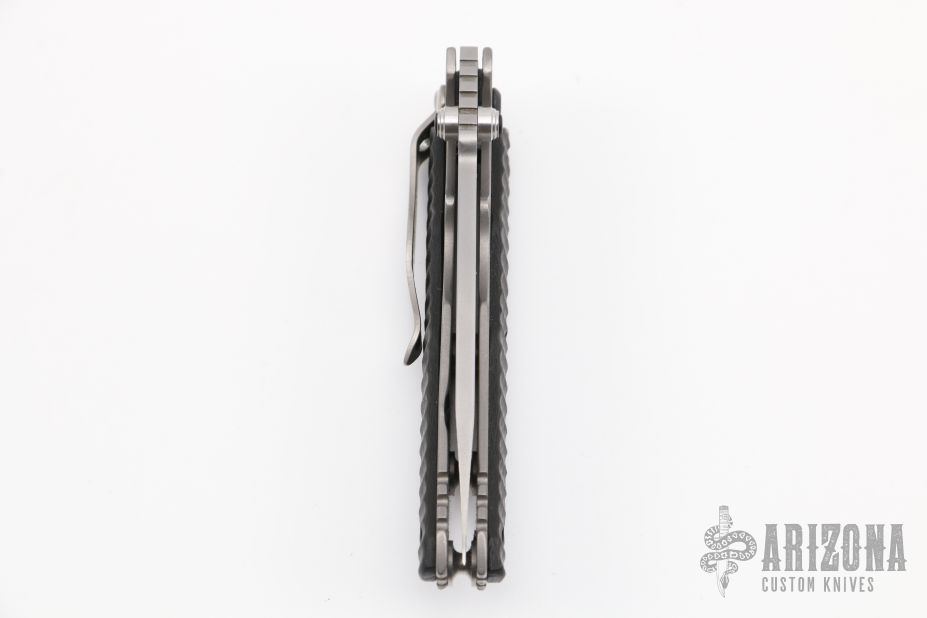 This Contender by RJ Martin features milled bevel blade with notched thumbrest and a thumbdisc. The handle has 2 deep finger grooves that provide positive indexing in both forward and reverse grips. Deep traction grooves on blade spine anchor the thumb, but don't hang up on your pocket during deployment. CNC Textured G-10 scales for maximum grip-ability. Ambidextrous textured Titanium thumb stud for slip-free blade opening. Satin finished titanium tip down pocket clip.  Includes a padded zippered case.  Light scratches are visible on the blade otherwise the knife is in Excellent Condition.

"I made my first custom knife in 1976, as a teenager. Being an avid fisherman, I loved to read the outdoor magazines, and the pictures in a Sports Afield article about Bob Dozier, peaked my interest. Those dropped hunters were beautiful! My father was an artist, and, I had already built fishing rods, lures, flies, and archery equipment, so I decided to build my first knife. It came out pretty well, and, the next was even better. You know the rest-I was hooked. I was so fascinated by steel and its heat treatment that I decided to become an Engineer. I graduated from Rensselaer Polytechnic Institute in Troy, NY in 1984 with a BS in Materials Engineering. I started life in the professional world as an Airframe Designer with Sikorsky Aircraft in Stratford, CT. Over the next 17 years, I was privileged to work on some of the finest helicopter designs in the world. The S-92, shown below, occupied much of my time during the mid-90’s. I served as the Airframe Co-Design Lead for the cockpit, which was designed in Taiwan as part of a joint venture. The Canopy structure is an all-composite design, made largely of Carbon Fiber and Titanium. I received my first patent on this aircraft, for the cockpit window jettison mechanism. After the S-92, I served in the same capacity on the MH-60S. During this program, high speed machining was introduced as a means to produce components faster and more accurately. I was fortunate to become involved in this effort, and immediately recognized the benefits of CNC technology. I knew I had to have a CNC of my own, and, purchased a machine in 1999. The MH-60S provided me with my greatest design challenge: Designing a cabin floor that incorporated an integral roller system for loading and moving 3000 LB pallets of cargo within the cabin of the aircraft. My experience in making folding knives helped me develop some of the stops and latches that were used. I was fortunate to have Knife making as a second job! Many of the lessons I learned in Knife making helped me solve problems in helicopter design, and vice versa. We actually solved a difficult design issue by using KYDEX, a common knife sheath material, to fabricate some tricky air conditioning ducts! I served as Chief of Design of the MH-60S for two years, before I retired in 2001 to become a full-time knife maker. I cannot imagine a better combination of careers. I was privileged to work with some of the finest people I have ever met, designing the finest aircraft in the world. Now, I am privileged to apply the skills I acquired to design and build some of the finest knives in the world."