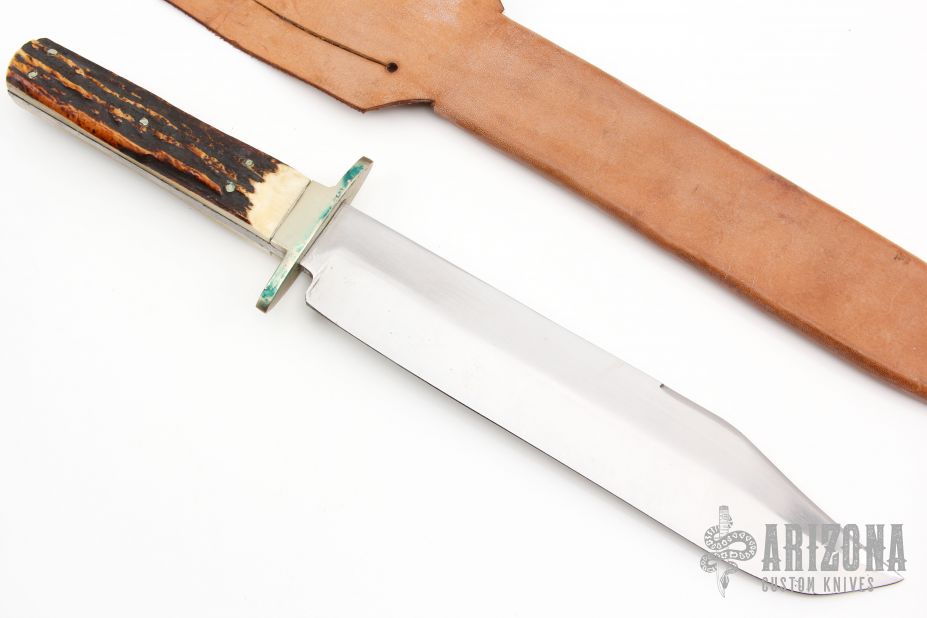 Get email notifications for Wostenholm, George add to wishlist

This Antique Bowie by George Wostenholm and Son features a satin finished blade with false top edge, .224" blade stock and 1.862" blade depth, full tapered tang construction. The handle has a nickel silver guard, stag scales and nickel silver pins. Comes with a brown leather sheath. Has some scratches and patina, otherwise good condition for its age.

The third George in this family business acquired the cutlers mark ‘I*XL’ in 1826; the mark which made the company famous. Wostenholm specialized in knives and razors, dominating the American market with their products. Their original workshop, Rockingham Works, became too small to cope with demand and by 1848 they moved to Washington Works, named in honour of their American trade. George Wostenholm was an excellent salesman, and made around 30 trans-Atlantic trips to America throughout his life. This was when sailing ships were still in use and steamships were still a very new innovation; the crossing would take a number of weeks and was still very dangerous. It was Wostenholm’s willingness to travel and his skills as a trader that meant the I*XL brand was one of the most famous in America by the mid-nineteenth century. It was his travel to America that meant he declined the role of Master Cutler three times saying that he would not be able to spare time to undertake the role, before he finally accepted in 1856. In the 1850s they increased production of their most famous product, the Bowie knife. These knives were often etched with American eagles and patriotic slogans.