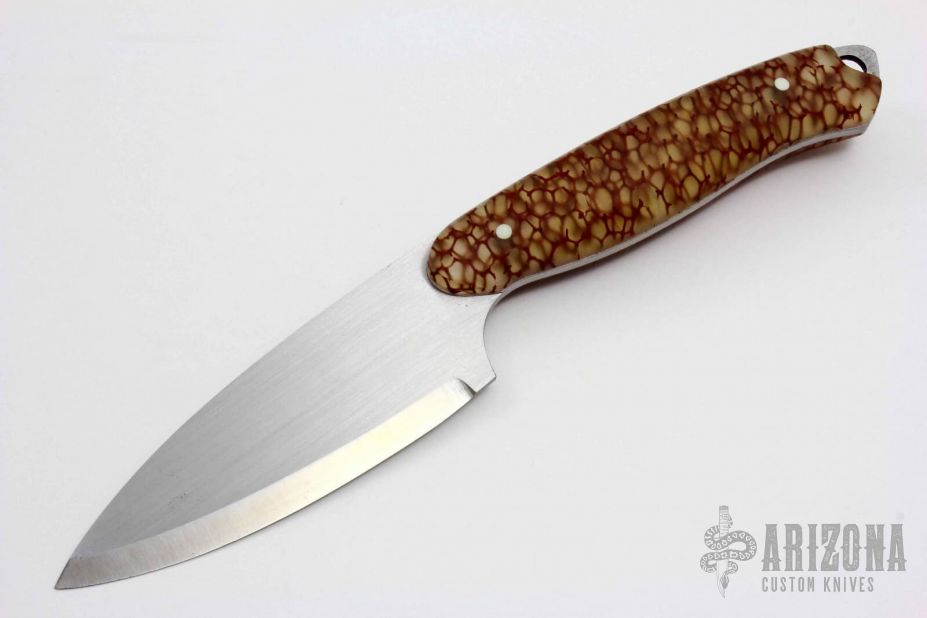 Get email notifications for Dogwood Custom Knives add to wishlist

This Piranha by Dogwood Custom Knives features a satin finished scandi ground blade, .090" blade stock and 1.269" blade depth, full tang construction. The handle has Glow in the Dark Honeycomb scales and white pins. Comes with a brown leather sheath. New from maker at the 2015 Blade Show.

Dan Eastland has worked with a blade of one type or another nearly all of his life. As a young boy, he followed his dad around the North Georgia woods clutching a new Barlow knife. He then spent time as a landscaper, an infantryman in the US Army, a carpenter, a furniture maker and all this time continued to be an avid outdoorsman. Dan used a wide variety of blades in these careers and applies this experience while designing and making his knives. Dan will argue that his path to knife making started at birth because he views it as a calling. In fact, he will often say, ?I go to bed at reading about knives and wake thinking about knives.? It started in early 2002 when his first son was born. Dan was a full time engineering student and was flipping houses in Atlanta when he had to make what he calls ""the easiest but most important choice of his life."" His first son was born prematurely and after a week in the ICU was going to need constant care. With his wife having to travel with work, he withdrew from school, sold off all the properties he could, and became a stay at home Dad. After a lifetime of working with his hands, he was slowly going crazy at home, so a friend and his wife conspired to get him into woodworking because he could do that in the basement at night and at nap times. After 10 years of woodworking he found himself standing in a blacksmith shop listening to a siren?s call. In the end, he worked a deal with the Smith to teach him to make knives. One working bowie later he was addicted! When the Smith moved his shop to Atlanta, Dan started running down Georgia knife Makers guild members and begged for help. Andy Roy of Fiddleback Forge invited him to the shop on a trial basis, and then could never get rid of him. Sanding, sweeping, what ever grunt work came along, nothing would run him off and he spent part of his time working in Andy?s shop to pay off his apprenticeship and the rest making knives. When Dan graduated from his apprenticeship he continued to work alongside Fiddleback Forge and Fletcher Knives, learning valuable lessons about quality knife making, customer service and running a small business. Then it was time for Dan to go out on his own. In 2013, the family relocated to Bucks County PA due to a job change for his wife and the business has continued to expand and thrive. When asked what he would consider success in knife making he replies, ?If one day a grandfather hands his grandson one of my knives and says ?my Dad gave me this knife when I was your age? then I will consider myself a success.?