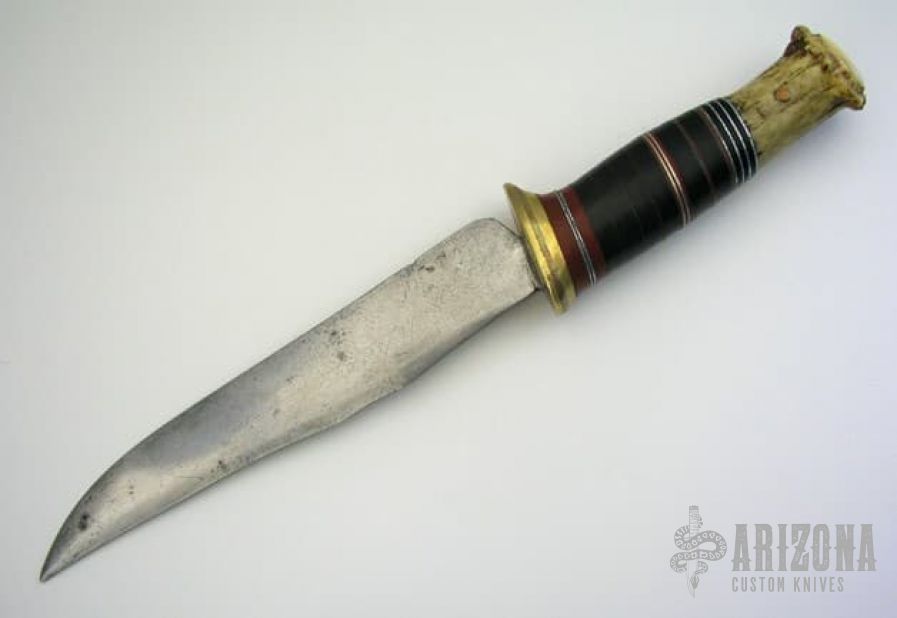 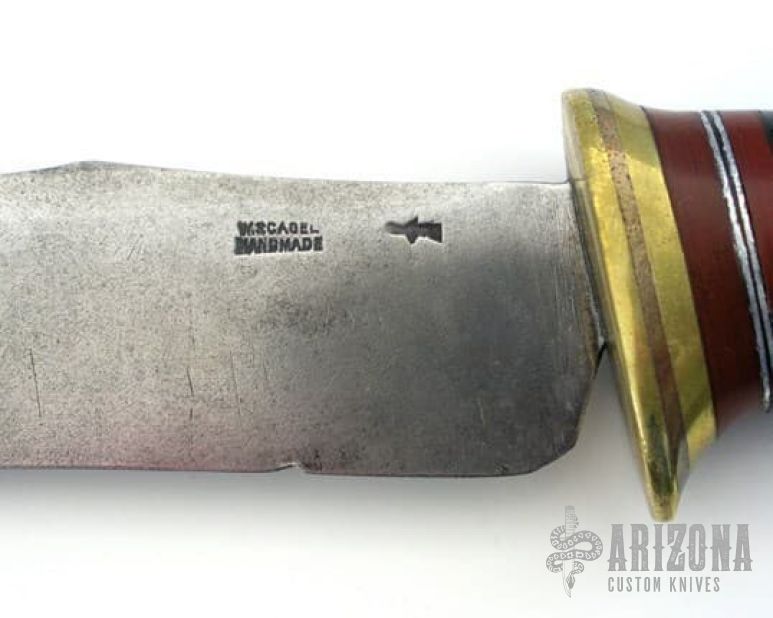 Get email notifications for Scagel, William (Bill) add to wishlist

Stamped W. Scagel Handmade on the front side of the blade. On the pile side the name H. Glover is etched in script over an arrow. We are advised that Bill Scagel made this knife for H. Glover and Bill etched the name on the blade himself (information from Paul Basch). There is a slight nick in the blade edge towards the rear. The handle is in exceptionally good condition. The date of origin of this knife is unknown. Blade Steel: Forged Steel

William (Bill) Wales Scagel (1873-1963). Considered to be the foremost pioneer in 20th century custom knifemaking. Scagel began making knives in 1910 while working at lumber camps throughout Michigan and Canada. From 1920 through 1929, Scagel sold his knives through Abercrombie & Fitch of New York and their subsidiaries such as Von Lengerke & Antoine. Scagel made hunting knives, machetes, and axes for the expeditions of the Smithsonian Institution. Scagel made a variety of knives throughout his career including bowie knives, fighting knives, and pocketknives. Scagel used a half stag and half leather stacked washer assembly in his knife handles that became his trademark style. One such Scagel knife provided the influence for Bo Randall to start making his own knives. In 1937, Randall witnessed someone using a Scagel knife to scrape paint off of a boat without damaging the edge of the blade. Randall bought the knife and in the years that followed Scagel became a mentor to Randall, influencing many of his designs. Every knife Scagel made was completely by hand and without modern tools such as a grinder or buffer, his shop was powered off a gasoline engine from an automobile and as a result, the quantity of knives he produced over his 50 years of knifemaking is very low. He made his last knife in 1962, the year before he died. Twenty-three years later he was inducted into the Blade Magazine Cutlery Hall of Fame in 1989. In 1996, Scagel was inducted into the American Bladesmith Society Hall of Fame.