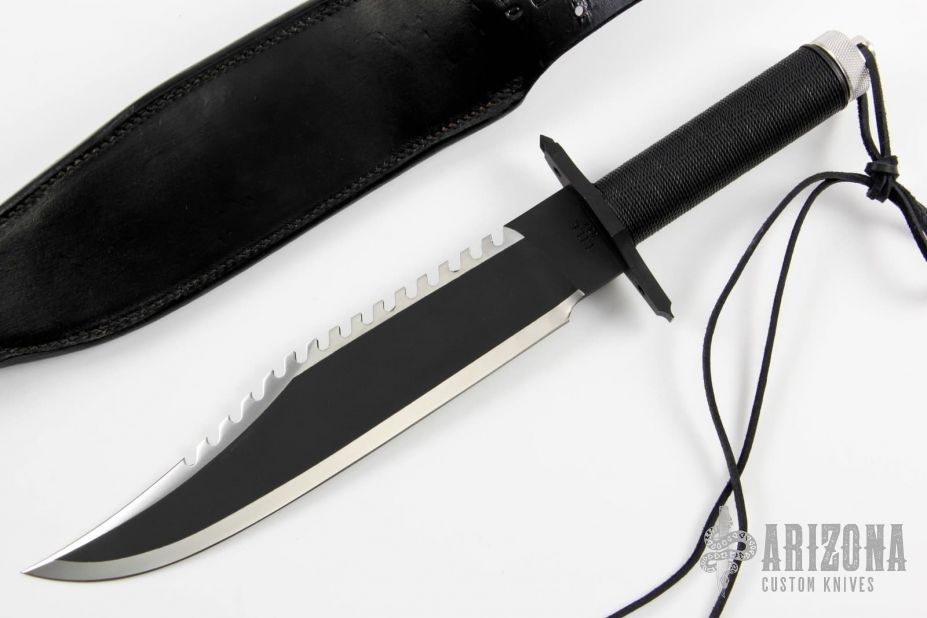 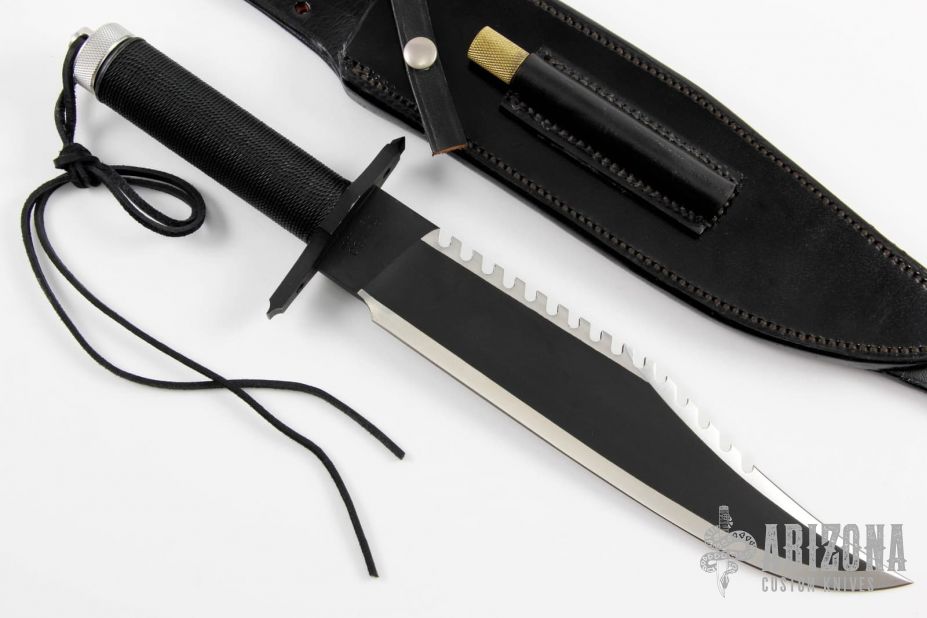 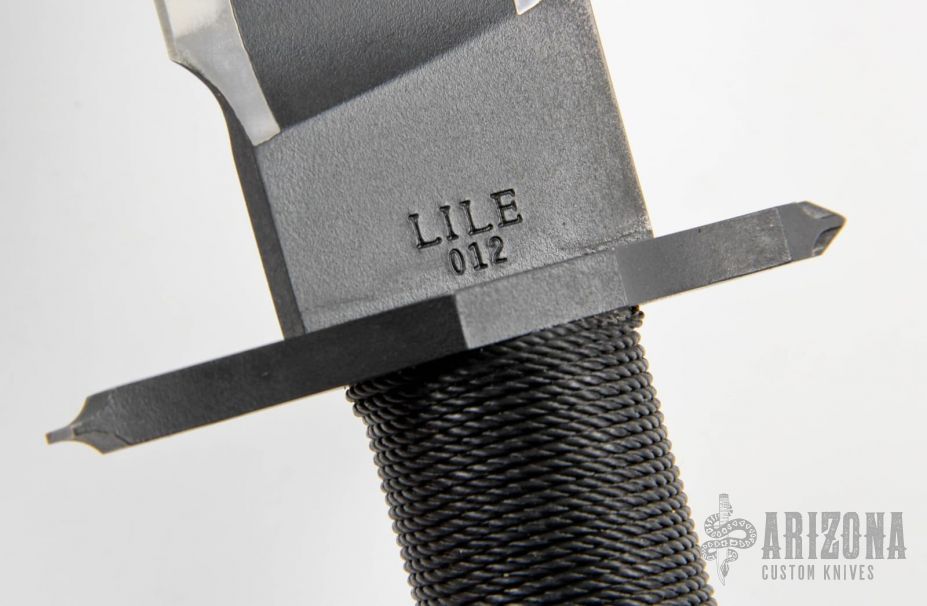 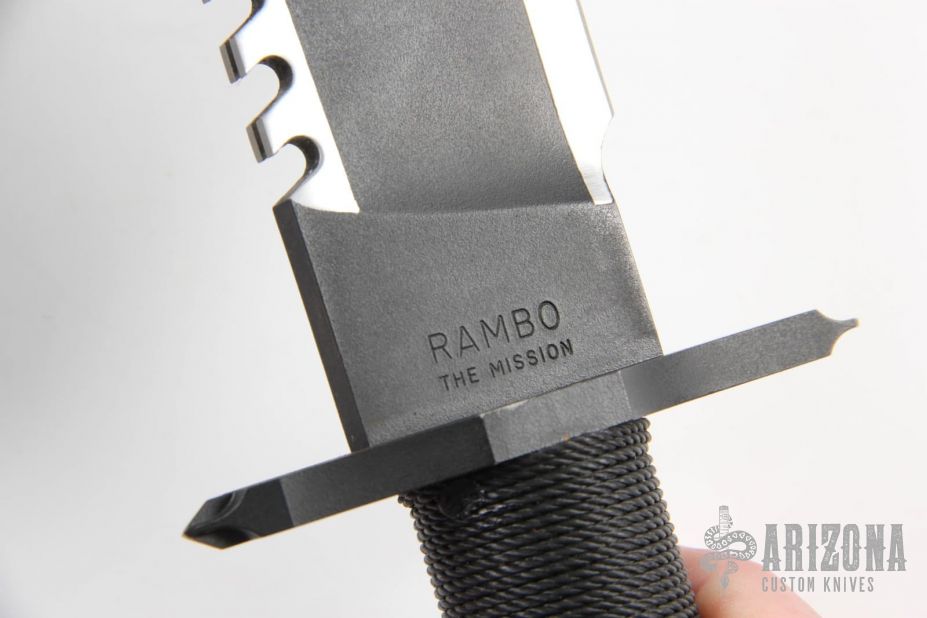 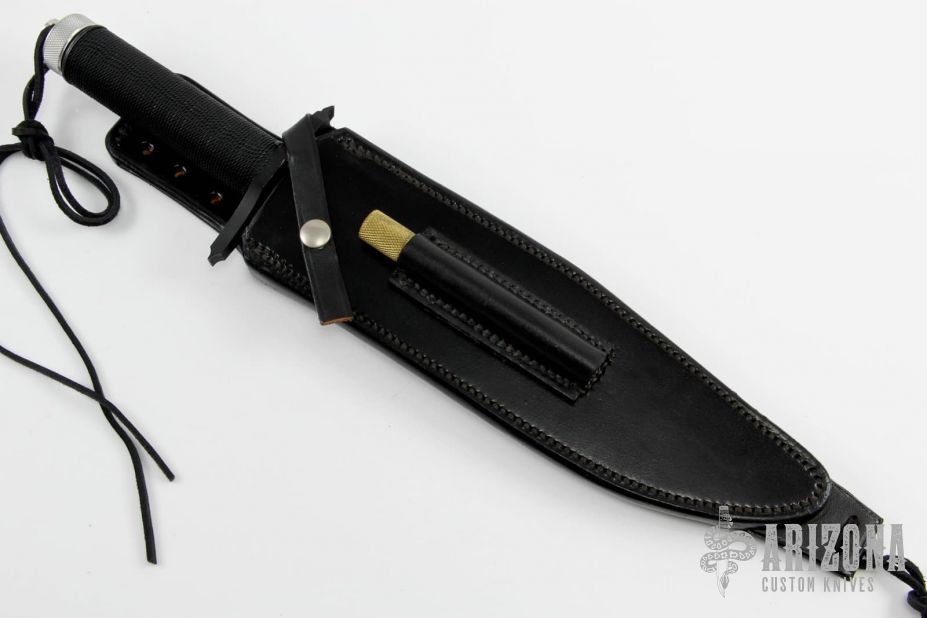 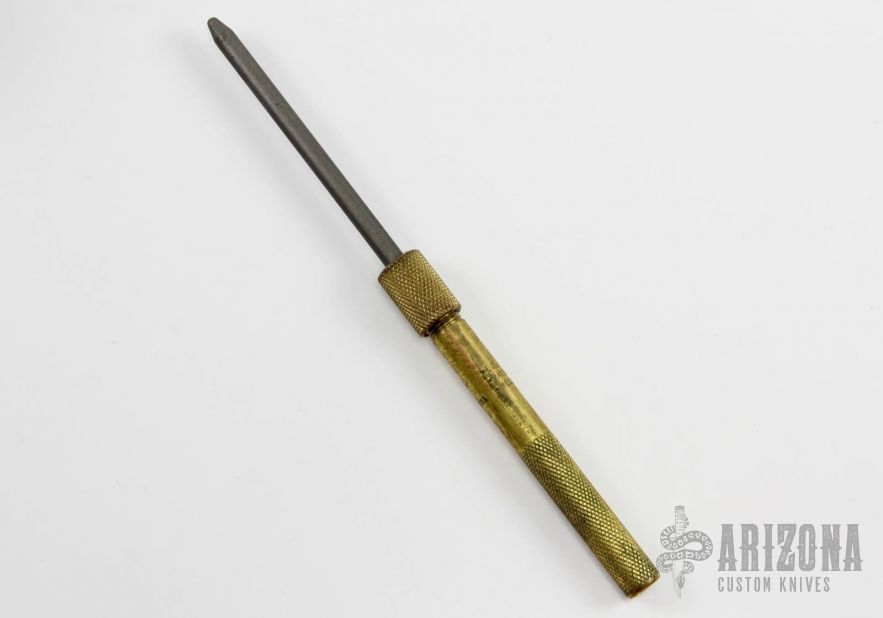 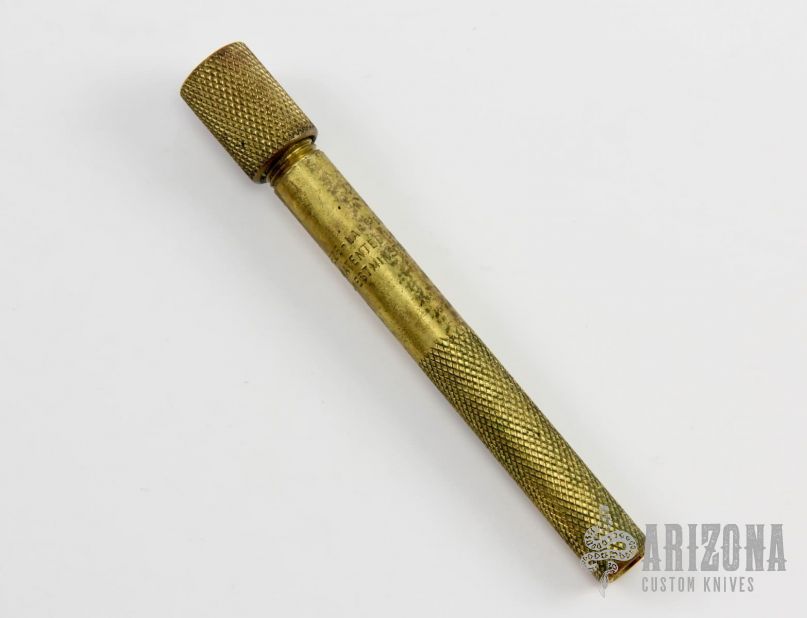 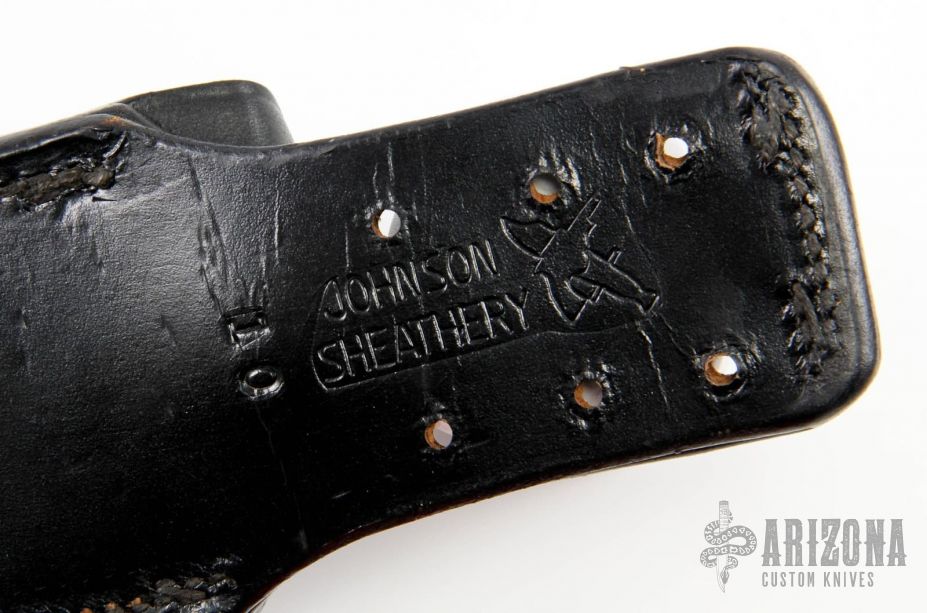 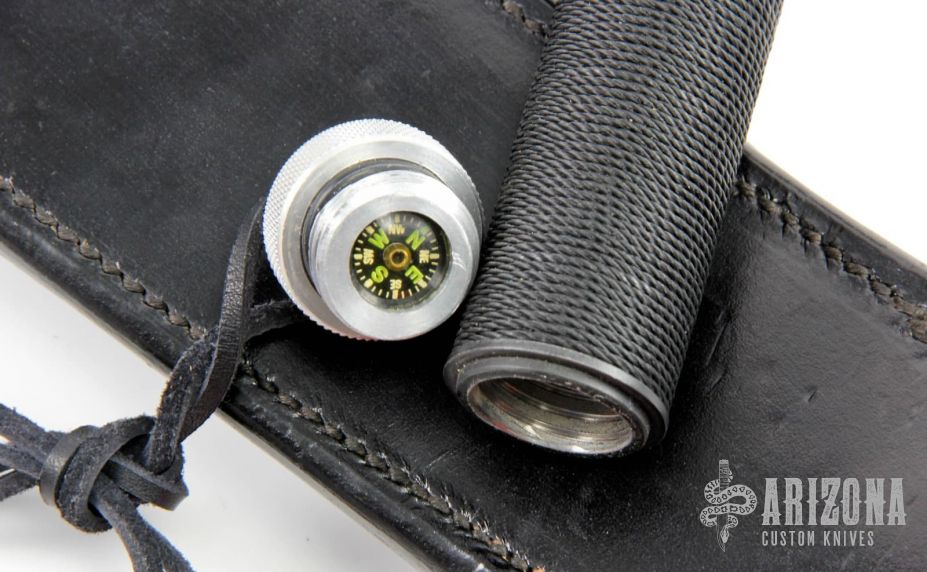 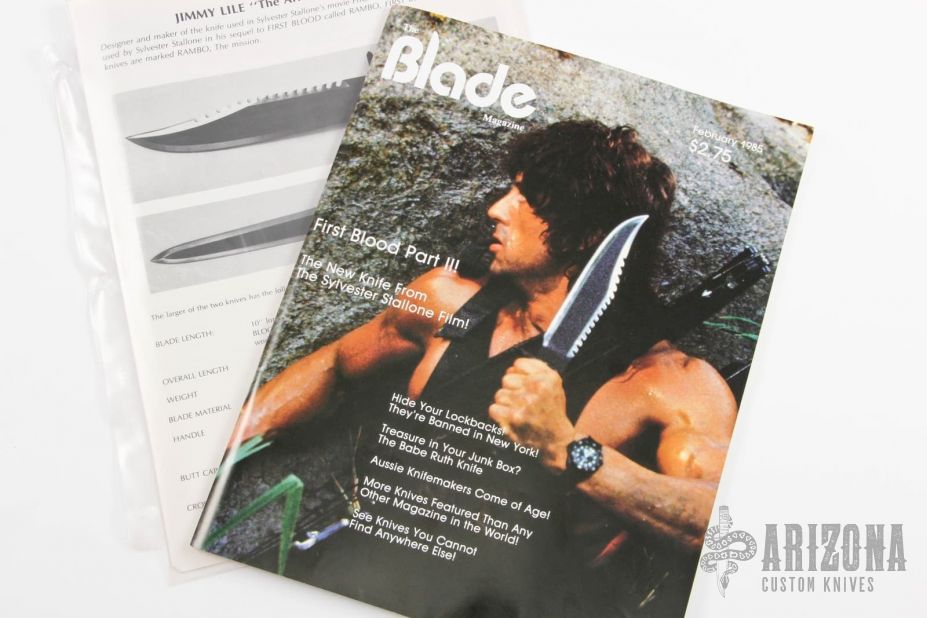 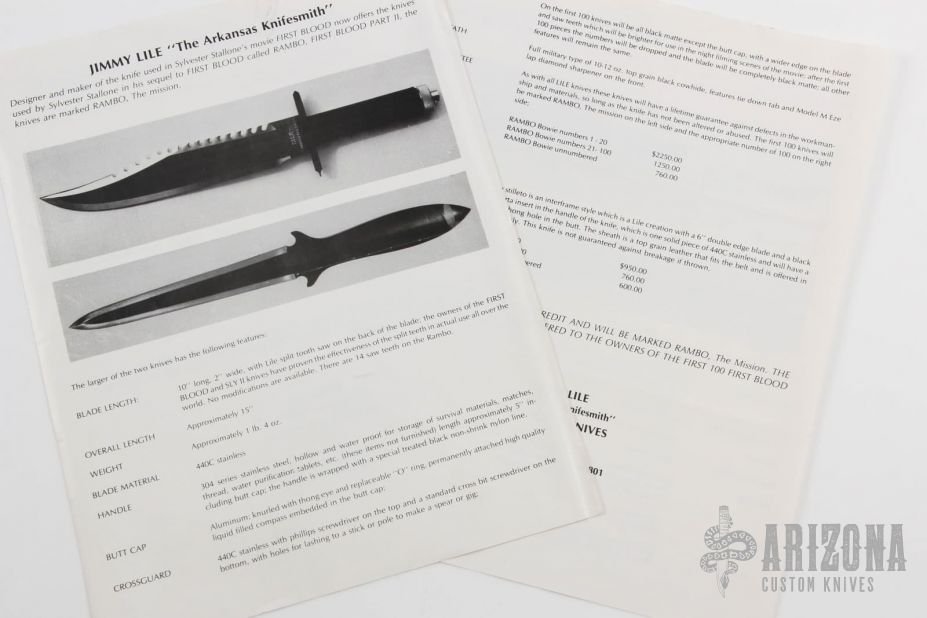 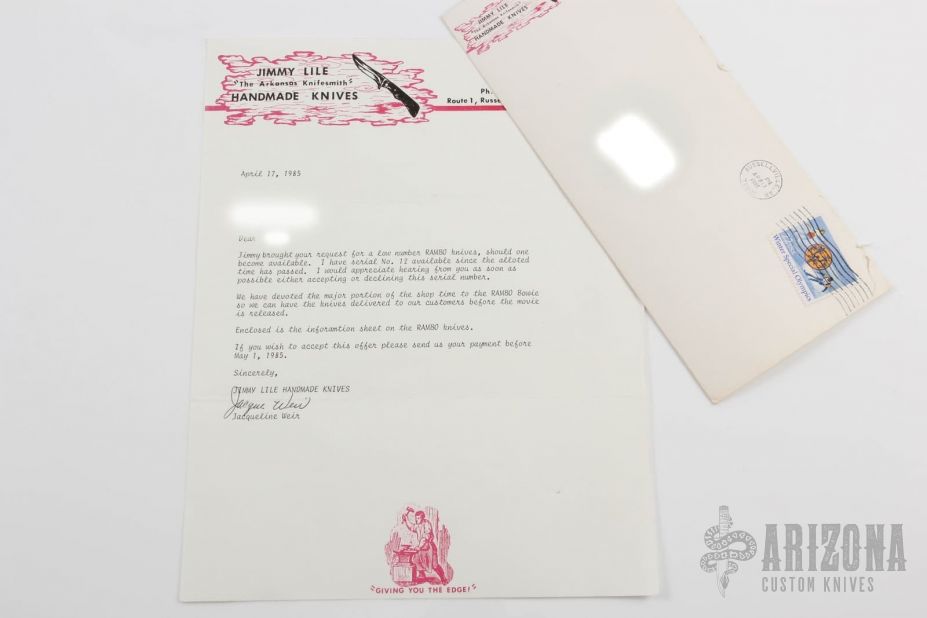 Get email notifications for Lile, Jimmy add to wishlist

This Rambo Mission knife by Jimmy Lile was featured in the movie "Rambo, First Blood Part II". It features a two tone blade with black center and satin grinds, 14 saw-teeth on blade spine, .243" blade stock and 1.945" blade depth, hidden tang construction. The handle has a black stainless steel double guard with flat and Phillips head screwdrivers, hollow cord wrapped handle, and aluminum removable butt cap with an O-ring to make it water-proof and a compass. Comes with black leather sheath that has a leather flap with a snap covering a honing stone that is embedded in the sheath. The blade is stamped "012". New condition. Comes with nylon zippered case, a copy of the February 1985 Blade Magazine, the original pamphlet about the Rambo knives, and a personal letter from the Lile shop to the original owner.

Here are a couple of links with more information.

James Buel Lile (August 22, 1933 – May 5, 1991), known as Jimmy Lile was an American knifemaker from Arkansas. Lile was the son of a coal miner, he made his first knife at the age of eleven by grinding an old file into a blade. In 1971, Lile became a full-time knifemaker and was known as "Gentleman Lile" or "The Arkansas Knifesmith". He was particularly known for his survival knife designs known as "The Mission" series, created by request for Sylvester Stallone to use in his first two Rambo movies. When Lile was approached with the specifications for the Rambo knife, he was told to design it not as a mere "prop" but as a basic tool to perform a variety of tasks. Lile adapted a basic clip point bowie knife which could be used to chop wood and slice food while retaining an edge. He employed a waterproof hollow handle design to store matches, needles, thread, and a compass; the hollow-handle allows the knife to be fitted to a pole to make a spear or gig. The handle was wrapped with nylon line that could be used for fishing or making snares. The tips on the guards were made into a standard and Phillips screwdriver and the spine was serrated. Lile chose to forge the blade of 440C high-carbon steel, which he claimed could cut through the fuselage of an aircraft.

"Hi, I’m John Hill, owner of Lile Knives, LLC. Some years ago, I and a former partner purchased all rights to the Lile brand from Marilyn Lile. I have always had the ultimate respect for Marilyn and Jimmy and their products. My goal is to deliver the best custom knife of this type in the world. Our current maker, Vaughn Neeley, is a 37-year, veteran, custom knifemaker. Vaughn uses only the finest materials in the world. Everything is made in his shop with the exception of the compass and twine. They’re all hand-ground, perfectly fitted and finished – custom style. Other people copy Jimmy’s knives, some are okay. We are not the cheapest, but we are the best." Jimmy Lile crafted the legendary First Blood Knife used in Rambo. In honor of his iconic creation, we have continued to produce Jimmy Lile’s knives to the highest standards of custom knife making today. We call these tributes to the Lile legacy, “Next Generation” Lile knives. Jimmy Lile’s life has also been commemorated in our book James B Lile, The Arkansas Knifesmith – Knife Maker to the World." Inducted into the Blade Magazine Cutlery Hall of Fame in 1984 and the ABS Bladesmithing Hall of Fame in 1999. Jimmy passed away in 1991.