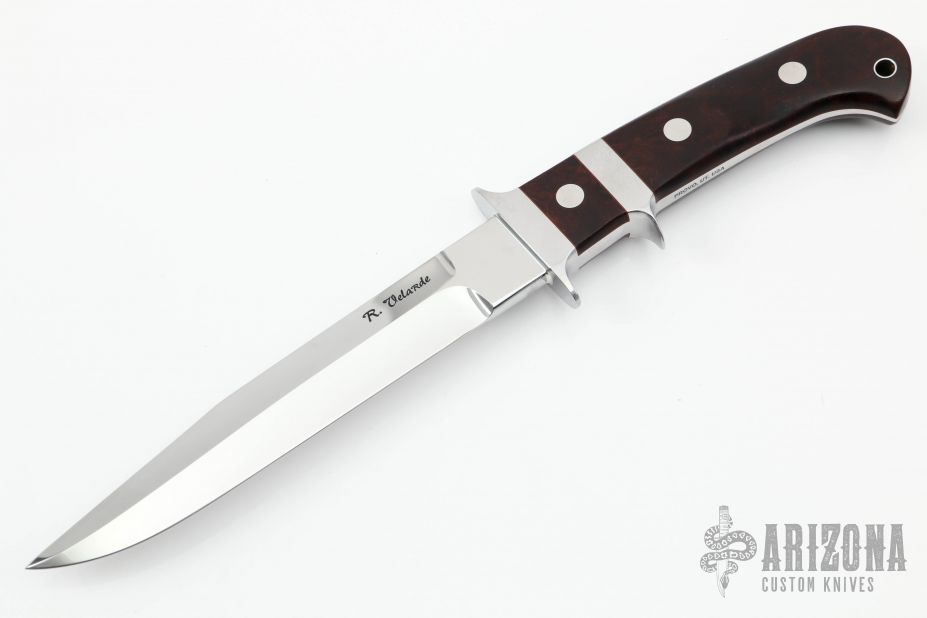 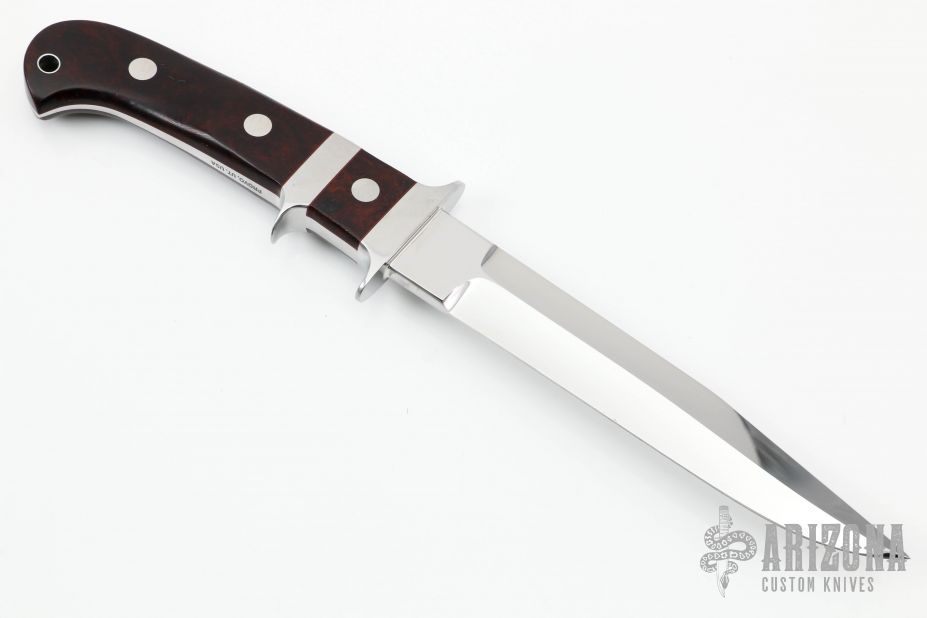 Get email notifications for Velarde, Ricardo add to wishlist

This Integral Sub-Hilt Fighter by Ricardo Velarde features a hand rub satin finished blade with a sharpened top edge, .255" blade stock and 1.019" blade depth, at the ricasso, full integral tapered tang construction. The handle has burl scales with red liners and a lanyard hole.light scratches are visible on the handle.

"My first business followed my first love - falconry. I had a small machine shop and produced equipment for the sport of falconry. In the early '90's, custom-made knives began to catch my interest, and I toyed with a couple of knives using the machines I already owned. My intrigue with the art grew, and in 1994 I went to the PKA show in Denver. I wanted to see what people who were making their living from fabricating knives were producing. At that show I was fortunate to meet J.P. Moss, an outstanding knifemaker from Texas. J.P. offered excellent one-on-one training in his shop, which I took advantage of the next fall. I look back on the three weeks I spent with J.P. as the beginning of my career as a knifemaker. The more I learned about knifemaking the more questions I had. One evening, while I was reading a knife magazine, I found an advertisement for a knifemaker that lived only a couple of hours from me. Because I was so new to the field I had had no idea who S.R. Johnson was. In retrospect, I'm glad I didn't know who he was in the knife-making world because I would have never found the courage to telephone him. I called Steve Johnson of Manti, Utah and began pestering him with questions. During our initial conversation he asked me what I did for a living and I told him I make equipment for the sport of falconry. Another lucky break for me - it turned out one of his sons had been trying to learn about falconry. Soon thereafter, I spent an afternoon with Steve and his son flying falcons, and Steve asked if I would like to see some of his knives before I went home. That evening was a major turning point in my career because after seeing Steve's knives I had a clear mental image of the height of artistic perfection I wanted to achieve. I spent as many weekends with Steve working in his shop as he would allow me. I never spent a day with him that I did not learn something new. He was very gracious and generous with his knowledge and never made me feel small. I will always credit Steve with being my mentor and inspiration. He taught me to never stop looking for detail in the pursuit of perfection. He also gave me the confidence to develop my own style and creative ideas. Dietmar Kressler invited me to display my knives at the 1997 Munich show. After the show he asked me to work for him in his shop the following summer. I spent most of the summers of '98 & '99 working for Dietmar learning to make integrals. In the short period of time Dietmar and I spent together he greatly influenced my style and methods of knifemaking. He taught me his technique of using hand files to accomplish symmetry and looking for light distortions to find mistakes. Obviously, my style is a combination greatly influenced by Johnson and Kressler."